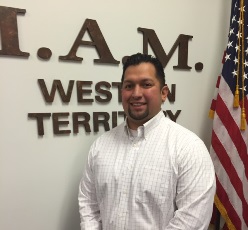 Solis, a U.S. Navy veteran, hired into Northrop Grumman and in 2010 became a member of IAM Local 575 in Azusa, CA, where he became Local President. At District 725, Solis served as a Blue Ribbon Committee member, Business Representative, Vice President and, most recently, Director of Organizing, where he led a number of successful organizing drives. Solis holds a bachelor’s degree in business administration from Saint Leo University and was a Coro Fellow in public affairs.

“Brother Solis has already proven himself as an organizer and a leader. We look forward to more great things from Joe as part of the Western Territory staff,” said IAM Western Territory General Vice President Gary Allen.