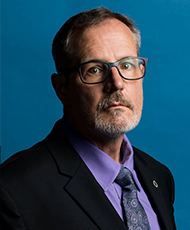 John Carr joined IAM Local 1725 in Charlotte, NC in 1995 after US Air Fleet Service workers voted to join the IAM. He immediately became active by volunteering for the safety committee and was elected shop steward.

Carr moved through the ranks to the fleet service grievance committee and was elected committee chairman and vice president of Local 1725. He was later appointed District 141 organizer.

Carr is a veteran of the U.S. Marine Corps.