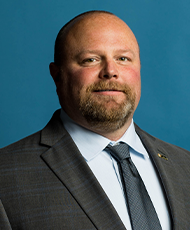 Josh Hartford initiated into IAM Local 409, now Local 318, in Waterville, ME as a machinist for the Springfield Terminal Railway Co. He served in a variety of local lodge positions before being appointed District 19 Employee Assistance Program Coordinator. He was also elected President of the Central Maine Labor Council from 2017 to 2019.

Hartford became a District 19 General Chairman in 2017 and was elected to another four-year term in 2019. His tenure includes overseeing many railroad agreements and working in several bargaining coalitions with various railroad unions. He’s currently a member of the Federal Railroad Administration’s Railroad Safety Advisory Committee (RSAC) and the District 19 arbitration review board.

Hartford was appointed Special Assistant to the International President, assigned to head the IAM Rail Division, on May 1, 2022.