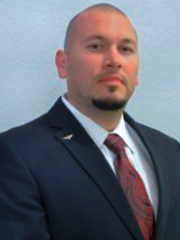 Born in Wichita, Kansas. Juan comes out of the Aerospace industry. He went to work at Cessna Aircraft in January 1999. He worked on two different lines including the Citation XL/ XLS as well as the Citation Sovereign. He started off as a sheet metal mechanic then went onto radio and electrical electrician and ended as a Final Assembly Mechanic. He was soon elected shop steward for his department at local lodge 774. While he was at Cessna Local Lodge 774 he was an organizer, union safety advocate, negotiator, trustee and an Assistant Plant Chair. In 2008 he was appointed Sergeant of Arms at the Grand Lodge Convention. In 2012 he was appointed to district lodge 70 as an organizer. Juan was appointed as a Special Representative in September 2015 in the Organizing department. He became a Grand Lodge Representative on September 1, 2018. Juan and his family now reside in Texas.