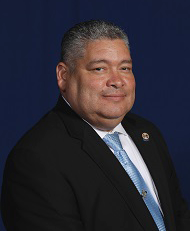 Negron joined the IAM after serving honorably in the U.S. Army, going to work at USF Red Star Trucking in 1987. On the shop floor Juan served the membership as a shop steward, frequently volunteering in political campaigns throughout New Jersey for the District 15 as well as the State AFL-CIO.  After 16 years as a skilled diesel mechanic and dedicated steward, Juan was elected as a Lodge 447 Business Representative in 2003.

Juan has served in many leadership roles within the IAM, and his community which includes being the lead political organizer in New Jersey for the union. He continues to serve, most notably, Juan is a member of the Executive Board of the New Jersey State AFL-CIO, Vice President of the Port Maritime Council, and in 2014 he became the first Latino to head a New Jersey Central Labor Council (CLC) being elected President of the Passaic County CLC. Juan also served on the boards of the Bergen County CLC, the Hudson County CLC, and the Working Families of New Jersey.

In 2006, Juan was in the first group of instructors for the Winpisinger Education & Technology Center’s innovative Spanish Leadership program.  Juan has been the Director of the extremely successful apprenticeship program for District 15 since 2010. Juan earned a Bachelor’s Degree in Labor Studies and Administration from the National Labor College, Silver Spring, Maryland, and in 2015, Juan became the Directing Business Representative of District 15.

Juan lives in Bergenfield, NJ with his wife Deborah. They are the proud parents of two sons, Xavier and Christian.