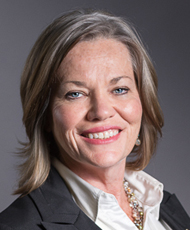 Mary Gunn hired out as a clerk for ATSF (Santa Fe) Railroad in Kansas City, Kansas in June of 1977.

She became active in Local Lodge 121, appointed to Protective Committee Member in 1979 and elected as Local Chairman in Jan 1994.

Sister Gunn was elected to GST for Unit 92 in Jan 2004 and then National Representative on October 1, 2005.

Gunn was elected as TCU/IAM National Vice-President, by the TCU Executive Council, effective January 1, 2017 and re-elected to that position at the 2018 TCU Convention.