National Vice-President and Special Assistant to the President. 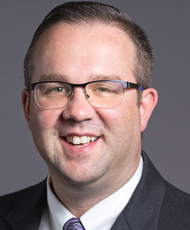 Matt Hollis was Elected TCU National Vice-President, by the TCU Executive Council on December 1, 2016 and re-elected to that position by acclamation at the 2018 TCU Convention. Matt was elected as Special Assistant to the President effective August 1, 2020.

Hollis, 32, began his Railroad career in February 2004 for CSXT Railroad as a yard clerk at Boyles Yard in Birmingham, Alabama.  He joined TCU Lodge 691 where he was appointed to serve as a protective committeeman in January of 2005.  In 2007 he was elected to the position of Chairman, Board of Trustees for Gate City Lodge 1295 headquartered in Atlanta, Georgia.  In November 2008, he was elected Local Chairman of Lodge 1295 and continues to serve in that capacity.  In August 2010 he was appointed by TCU/IAM National President Scardelletti to serve as an Assistant National Representative for TCU/IAM Unit 96 in Jacksonville, Florida.  In January 2014 he was appointed to the position of National Representative for TCU/IAM Unit 96.