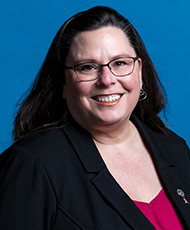 Sister Morgan is serving the IAM Western Territory as a Special Representative.

Morgan has been an active member of the IAM for more than 30 years.  She initiated into Sky Harbor Lodge 2559 in May of 1989 and served in almost every capacity within the local and State councils.  She served the local as Trustee, Recording Secretary, Vice President, Communicator, Educator, and President.  She also served on numerous committees including Organizing, Community Service, and the Women’s Committee.

While working at Southwest Airlines Morgan served as Shop Steward for 19 years and was active on the joint safety committee for more than two decades.  As her involvement in the local grew, so did her activism outside the local.  She began attending Arizona State Council of Machinists meetings quarterly. It was at the State Council where Morgan received her greatest education-engaging with members outside of her own territory and understanding the labor movement as a whole.  She served as Auditor, Trustee, Vice President, Secretary-Treasurer, and President.  She was the first female president of a State Council in the IAM and the first from Transportation in Arizona.

Morgan worked as a Communications Representative for the IAM for 15 months from 2004-2005 but went back to Arizona to raise her children.  She became the Education Representative for the Western Territory in February 2016 until the layoffs in July of 2020.  Morgan returned as an Instructor for the William W. Winpisinger Education and Technology Center in January 2021 until her most recent appointment as Special Representative.