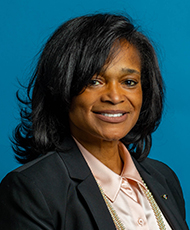 Nicole L. Fears became an ExpressJet Flight Attendant in 1994 and was elected as a Shop Steward for IAM Local Lodge 2339C in 1996. She also served as the Educator at her local lodge. In 2000, she became the first black woman to be elected President of Local 2339C.

She helped and assisted with organizing CommuteAir Flight Attendants to join the IAM, and in 2011 Fears also assisted in the merger of ExpressJet and Atlantic Southeast Airlines, bringing a combined membership of 2,200 to the IAM. In 2017, Fears was elected as Vice President for ExpressJet at District Lodge 142. Fears led the Women’s Committee in Atlanta for the Coalition of Black Trade Unionists and studied labor relations at the National Labor College.