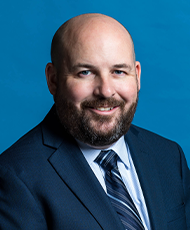 Brother Shepherd studied business at Utah Valley University earning a degree and an early work history in accounting and economics. As a licensed pilot since 1999 and wanting a change from corporate accounting, he later pursued, and received a Bachelor’s in Aeronautics from the University of North Dakota.

Paul was introduced to the IAM while he was working as a service contract Air Traffic Controller/Flight Service Specialist at Lockheed Martin in Prescott, Arizona. In 2008-2009 the IAM ran a nationwide campaign and successfully organized all the Lockheed Martin AFSS Air Traffic Controllers. Brother Shepherd had a front row seat to that 18-month campaign and, wanting to help his sisters and brothers find justice on the job, joined the IAM.

Paul was initiated in 2009 as a charter member of the newly formed IAM Local 2009 and selected as the first Local Lodge President. He was elected to the national negotiating committee as a Bargaining Representative where he remained for that first and each follow-on CBA. He was also elected Chief Steward, a position he held until 2015. That year the Executive Council authorized and established a new Business Agency that merged the servicing of several smaller locals. Brother Shepherd was selected as the President/Directing Business Representative and Organizer of IAM Local 2009 which would later merge into IAM Local 519. He also serves as Vice-President on the Arizona State Council.

As P/DBR overseeing negotiations, servicing, and organizing, Paul brings his professionalism, understanding of economics, negotiation acumen, and expertise in Service Contract to the fight every day on behalf of the members of the unaffiliated local lodges throughout Arizona and Southern Nevada.