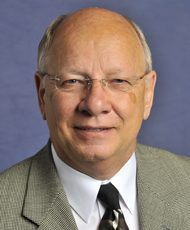 Rich began his rail career in 1971 and four years later became a journeyman carman. After serving Lodge 1266 as Local Chairman, he went on to become Vice General Chairman of his Board in 1982. Appointed a Carmen Vice President in 1985, he was elected in 1987 and re-elected in 1991. He was elected Carmen Division Assistant President in 1992 and was returned to that post in 1995.