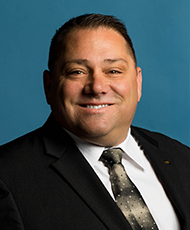 Johnsen began his IAM career in Local 1781 as a Mechanic Assistant for United Airlines in 1988 and was promoted to Mechanic in 1990. He served in many positions at the local and district level and was appointed as Assistant General Chairperson for District 141M in 2000, then as a Grand Lodge Special Representative in 2001.

Johnsen served as a Transportation Department Grand Lodge Representative and has been an IAM member for more than 33 years.  He also served as the IAM Representatives Association (IAMRA) President from 2017-2021.