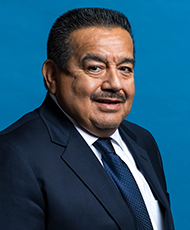 As a Directing Business Representative, he has led his local to organize over ten other companies in the Southern Arizona Area. In addition, Bobby has held the positions of Vice President, Auditor, and Lay member of the Executive Board.

In 2003 he was appointed to the Blue Ribbon Commission by International President Thomas Buffenbarger and had been a Delegate to the 33rd and the 36th Grand Lodge Conventions as well as the 2005 AFL-CIO Convention.

He has served on the Executive Board of the State of Arizona AFL-CIO and was the finance and Budget Committee Chairperson for the innovative restructuring of the State AFL-CIO. In addition, he served as the Chairperson of the newly formed Pima Area Labor Federation until 2006.

In 2000 was “Citizen Activist of the Year” by the Arizona Citizen Action. In 2003 his Local Lodge received a General Excellence award from the International Association of Machinists and Aerospace Workers Western Territory General Vice President Lee Pearson. In 2004 as the Directing Business Representative, he was awarded “Organizer of the year,” in 2005, he received the award for Political Excellence and in 2006 received the “Coraźon de Justicia” award for human rights work in Southern Arizona.

His community activities involve The Cesar Chavez Holiday Coalition, the Regional Transportation Committee, and The Board of Directors for the United Way of Southern Arizona.

He has training in Process improvements, lean manufacturing, Leadership Psychology, Multi-Cultural Leadership Development, Labor Law and Arbitration, Supervision and Management, Workplace ergonomics, and lay ministry. In addition, he has attended numerous classes at WWW Technology Center, AFL-CIO Leadership Institute, graduated from Tech school in Industrial and Communication Electronics and has a Bachelor of Arts Degree from the National Labor College.

Bobby enjoys attending church with his family, visiting with his grandchildren, reading, and playing outdoor sports. Bobby has been married for over 35 years to his beautiful wife Lori, and they have three children, Adam, Ashley, and Robbie, and five granddaughters, Savannah, Jami, Julie (deceased), Isabelle, and Ava.