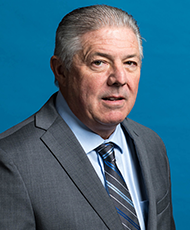 Sean Ryan was initiated into Local Lodge 2444 in April 1985 while working for Piedmont Airlines in Norfolk, VA, as an Aircraft Maintenance Technician, where he served as Grievance Committee Chairman from 1990-2008. In 1995, he was appointed and later elected as President of the newly chartered Local Lodge 2914, where he served in that capacity until 2008 when he was appointed and later elected as a General Chairperson for District Lodge 142. Ryan was also part of a large team that organized the US Airways Fleet Service group into the IAM and also served on the Transition Negotiation Committee for the Mechanic and Related groups after the US Airways/America West merger. Ryan was appointed as a Special Representative to the Air Transport Territory on January 1, 2020, and currently serves the Membership as a Grand Lodge Representative.