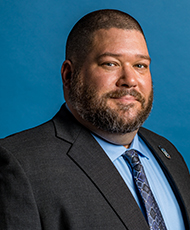 Shaun initiated into IAM Local 1869 in 2010 as a locomotive diesel mechanic with Norfolk Southern and served as the Secretary-Treasurer for over eight years. He also served as the Communicator, developing the annual newsletter. In 2015, Trude became a Worker-Trainer with the ICWUC and CREST in Chemical Emergency Response, Chemical Plume Mapping and Hazardous Materials Worker Awareness Training for the Railroad Industry.

Since joining the Safety & Health Department, Trude has acquired his credential to provide First Aid/CPR/AED training, became an OSHA Authorized General Industry Trainer and earned the designation of a Certified Instructional Trainer from the Board of Certified Safety Professionals.

During his time as a Worker-Trainer, Shaun assisted with the presentation of numerous Chemical Emergency Response training sessions and Plume mapping software overviews.

Trude was elected as his local’s delegate for the 2017 and 2018 PA State Machinist’s Council Convention and the 2018 District Lodge 19 Quadrennial Convention. He also attended the 2018 NIH National Trainers’ Exchange and completed Disaster Response Train the Trainer in December of that year.

After serving in the US Army as a light wheel vehicle mechanic, Trude continues to serve his community as an Authorized Volunteer with Operation Lifesaver, an Assistant Scoutmaster and Merit Badge Counselor with BSA and an officer of his local Loyal Order of Moose Family Center. Shaun holds a Bachelor’s of Science from Shippensburg University.