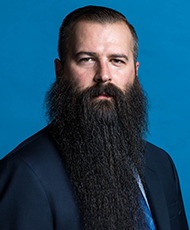 Brother Van Wie began his career serving in the U.S. Air Force as a Dedicated Crew Chief on the F-15 and F-22 airframes. Serving in subzero temperatures on the flight lines of Elmendorf, Alaska was a true test of will. While not working on jets, he served as the Head Trainer for the Base Honor Guard Team. He led the teams in delivering final burial honors for fallen service members.

After serving honorably in the Air Force, he started his career as a civilian mechanic working on military test aircraft for Pratt and Whitney at Edwards AFB in Southern California. This is where he was first introduced to the IAM. He quickly took on the role of steward and contract negotiator for his shop. There, Van Wie learned the true value of unionism and fighting for his sisters and brothers. In 2015, he was hired at District Lodge 725 as an Apprentice Organizer. There he applied the same principles he had learned early in his union career, fighting for workers in demanding dignity, equality, and respect in the workplace.