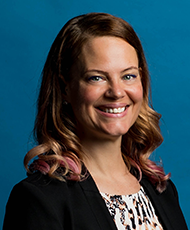 Valana started with the union in 1997 in the HPWO Department as support staff. From there she worked in the Legislative and Political Action and Strategic Resources departments.

Valana later took web development and coding classes at her local community college. This led her to the start of her career in the Communications Department in 2001. She started as an editorial assistant, shadowing the camera operator and learning the craft of shooting and lighting.

Several years later, Valana taught herself how to edit video using Media 100, editing scripts written and shot by other members of the staff. In 2004, she was promoted to communication representative and began writing, shooting, and editing videos.

Valana has now been with the IAM for 25 years. Today she does a little bit of everything, from video production to graphic design, photography, and social media content development. Valana is responsible for longer formatted videos that highlight our membership in various tones. She’s covered the Cummins strike, the MBTA bus mechanic fight against privatization and the successful campaign against so-called “right-to-work” in Missouri. She’s also covered the contentious 2022 Boeing Negotiations in St Louis and has also worked extensively with the IAM Maine Lobstering Union throughout their tenure with the IAM.

What Valana loves most is the opportunity to meet and work with the members of the IAM—being their voices, telling their stories and capturing moments that will be remembered for decades to come.

In her free time, she enjoys learning about sports photography and spending time with her family.