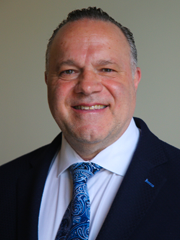 Vincent Addeo was initiated into Local Lodge 702, District 100, in 1980 when he began his career in aviation as an Aircraft Technician for Eastern Air Lines at their overhaul facility at Miami International Airport.

In 1985, he transferred commercial air carriers to US Airways as a Line Maintenance Technician at Newark International Airport, Local Lodge 1445, District 141, where he retired in 2010 after a thirty-year career in aviation. During his time in the airline industry Vinny served as a Shop Steward, Grievance Committeeman, Local Committee Chairman, Flight Safety Representative, Employee Assistance Representative, and Recording Secretary for Local Lodge 1445 at Newark Airport.

Vinny was recruited to work for the IAM Transportation Department in 1998 as a District Organizer where he served for seven years organizing in airline industry.

In 2002, Vinny was appointed by the International President to serve on the IAM’s Blue Ribbon Commission, conducting town hall meetings with IAM members across the country.

Vinny also served as the President of the New Jersey State Council of Machinists for eight years, Executive Board Member of the Hudson County Central Labor Council, and Member of the Private Sector Lobbying Committee for the New Jersey State AFL-CIO. Vinny has been elected to serve as a Delegate to every Grand Lodge Convention since 1996. He also served his community in Hoboken, New Jersey, as an elected City Councilman and a Committee Member for the Democratic Party and was also elected by his community to serve as a Delegate to the 2016 Democratic National Convention held in Philadelphia.

Vinny lives in Hoboken, New Jersey, with his wife Michele and together they are the proud parents of their son, Vincenzo, a student at Rutgers University and their daughter, Tessa, a student at Ramapo College.