By any measure, the U.S. economy is massive. Like the sea, our economy is swept by cross currents and changed by forces beyond its control. Yet, its sheer size means that those forces – increased productivity, rising unemployment, dropping interest rates, global competition — may only be felt months and often years after they are first sighted. Economic Trends tries to track those forces so IAM members can prepare their families for what lies just over the horizon.

EPI’s Family Budget Calculator measures the income a family needs in order to attain a modest yet adequate standard of living. The budgets estimate community-specific costs for 10 family types (one or two adults with zero to four children) in all counties and metro areas in the United States. Compared with the federal poverty line and the Supplemental Poverty Measure, EPI’s family budgets provide a more accurate and complete measure of economic security in America.

CEPR’s Blue Collar Jobs Tracker (Blue Collar Jobs) provides an opportunity to  take a look at the path of job growth in four major blue-collar industries: manufacturing, mining, construction, and logging.  Each month, CEPR update this site with the latest Bureau of Labor Statistics state level jobs data so that you can follow job growth in these industries.

Subsidy Tracker  is the first national search engine for economic development subsidies and other forms of government financial assistance to business. Violation Tracker is the first national search engine on corporate misconduct. It covers banking, consumer protection, false claims, environmental, wage & hour, unfair labor practice, health, safety, employment discrimination, price-fixing, bribery and other cases initiated by 43 federal regulatory agencies and the Justice Department since 2000; in all, 300,000 civil and criminal cases with total penalties of more than $394 billion. Other types of violations will be added later.

The Federal Reserve Bank of Atlanta produces several sets of interactive charts and data visualizations focused on a variety of national and regional economic conditions, such as the labor market, housing and real estate, inflation, and small business. Each of these charts allows our users to explore the data sets over time and export them in a variety of formats.

National Economic Indicators is updated weekly and includes detailed graphs of the latest data on the national economy. This is part of the information gathered by the Richmond Fed and presented during policy discussions and meetings with our board of directors.

U.S. Economy in a Snapshot, produced by the Research Function of the New York Fed, is designed to provide a tight yet comprehensive overview of current economic and financial developments. The monthly charts and commentary on a broad range of topics that include labor and financial markets, the behavior of consumers and firms, and the global economy.

According to United States Department of Labor May Jobs Report, for the month of April, the unemployment rate (u-3) increased to 14.7 percent, while the “underemployment” rate (u-6) rose to 22.8 percent.

Even though many jobless claims are delayed by clogged state application systems, those already filing claims since mid-March have reached nearly a quarter of the workforce in Michigan, Pennsylvania, Hawaii, Rhode Island and Kentucky.

The United States unemployment rate jumped to 4.4 percent in March 2020, the highest since August 2017 and well above market expectations of 3.8 percent (pre coronavirus forecast), as the COVID-19 crisis threw millions out of work. Overall, nonfarm payroll employment declined by 701,000 jobs.

President Trump’s tax law lavishes tax cuts on corporations and the wealthy, while stacking the deck against working families across the country. In addition to permanently lowering the corporate tax rate to levels not seen since the 1930s, the new law offers many companies a sweetener: they can reduce their tax liability even more by moving operations and jobs overseas.

Many state retirement systems are on an unsustainable course, coming up short on their investment targets and having failed to set aside enough money to fund the pension promises made to public employees. Even as contributions from taxpayers over the past decade doubled as a share of state revenue, the total still fell short of what is needed to improve the funding situation.

Right to Work (for less)

The number of Americans represented by labor unions has decreased substantially since the 1950s, and a new Pew Research Center survey finds that the decline is seen more negatively than positively by U.S. adults. The survey also finds that 55% of Americans have a favorable impression of unions, with about as many (53%) viewing business corporations favorably.

An increase in average life expectancy for individuals in the United States is a positive development, but also requires more planning and saving to support longer retirements. At the same time, as life expectancy has not increased uniformly across all income groups, proposed actions to address the effects of longevity on programs and plan sponsors may impact lower-income and higher-income individuals differently.

Today, many Americans rely on savings in 401(k)-type accounts to supplement Social Security in retirement. This is a pronounced shift from a few decades ago, when many retirees could count on predictable, constant streams of income from traditional pensions. This chart book assesses the impact of the shift from pensions to individual savings by examining disparities in retirement preparedness and outcomes by income, race, ethnicity, education, gender, and marital status.

The U.S. population is aging and so are its debts. This post looks at how debt is changing as baby boomers reach retirement age and millennials find their footing.

AFL-CIO Executive Paywatch 2016: Check out what the Top 1 Percent is making and how you compare.

The Effect of Rising Inequality on Social Security by Rebecca Vallas, Christian E. Weller, Rachel West and Jackie Odum – February 10, 2015  The nation’s Social Security system has long been a bedrock of economic security, protecting nearly all American workers and their families in case of retirement, disability, or the death of a primary breadwinner. Over the past three decades, however, rising inequality has increasingly threatened the notion of shared economic security.

Report of the Commission on Inclusive Prosperity by the Center for American Progress (1/15) Today, the ability of free-market democracies to deliver widely shared increases in prosperity is in question as never before. For the first time since the Great Depression, many industrial democracies are failing to raise living standards and provide opportunities for social mobility to a large share of their people. This is an economic problem that threatens to become a problem for the political systems of these nations—and for the idea of democracy itself.

Failing on Two Fronts: The US Labor Market Since 2000 – For almost four decades and by almost all available measures, economic inequality has been increasing in the United States. The long-standing rise in inequality, now joined by an extended period when the economy has been unable to generate jobs for the country’s growing population, constitutes a deep failure on two fronts: steeply rising inequality combined with a poor employment performance. This paper argues that a key driver of both of these developments is conscious economic policy, with a particularly important and under-appreciated role for macroeconomic policy. (CEPR, 1/2015) 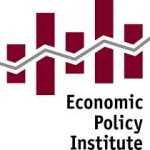 The erosion of collective bargaining has widened the gap between productivity and pay (1/15). Click here to read more on this subject.

Raising the Federal Minimum Wage to $10.10 Would Save Safety Net Programs Billions and Help Ensure Businesses Are Doing Their Fair Share: More than five years have passed since the federal minimum wage was raised to its current level of $7.25 per hour (10/14).

The State of Working America: An ongoing analysis published since 1988 by the Economic Policy Institute. Includes a wide variety of data on family incomes, wages, jobs, unemployment, wealth, and poverty that allow for a clear, unbiased understanding of the economy’s effect on the living standards of working Americans.

The Joint Economic Committee of The United States Congres

The U.S. Department of the Treasury

Additional Publications with Reports, Articles and Helpful Information by Topic