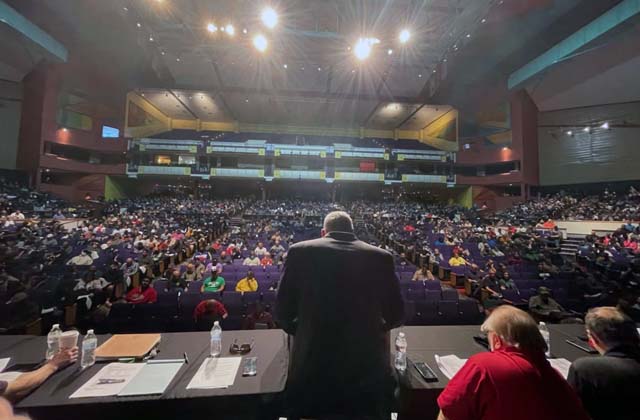 CROMWELL, Conn., May 1, 2022 – Approximately 3,000 members of the International Association of Machinists and Aerospace Workers (IAM) District 26, Local 700 in Middletown and Local 1746 in East Hartford, Conn., voted to ratify a new contract with Pratt & Whitney, a Raytheon Technologies Company. The three-year agreement takes effect on Monday, May 2.

IAM members at both Connecticut facilities manufacture, repair, and produce parts for commercial and military engines, including the KC-46 air refueling tanker, F-35 joint strike fighter, and the A320 commercial airliner.

“This negotiating committee studied, prepared, and executed the very best for our membership,” said IAM District 26 Assistant Directing Business Representative and Chief Negotiator Jeff Santini. “As a result, we have made solid gains in nearly every aspect of our agreement and maintained previous important language.”

The IAM District 26 negotiating committee unanimously recommended the proposal. Contract negotiations have been ongoing since the end of March.

“During the pandemic, our members, deemed essential, took their roles to maintain production and helped the company remain profitable seriously,” said IAM International President Robert Martinez Jr. “The IAM continually proves why we are the premier aerospace and defense labor union globally. Our members stood alongside their negotiating committees to demand a contract representing their commitment to the company. Thank you to the District 26 leadership and negotiating committees, the IAM Aerospace Department, and the Eastern Territory teams who supported these negotiations.”

These negotiations were part of a string of critical negotiations for the IAM. This year alone, negotiations will directly impact over 55,000 workers covered by agreements. In addition, these IAM-represented jobs across the country indirectly support over a million jobs, families, and communities.

“This was a solid effort by the negotiating teams in securing a firm agreement coming off a 5 1/2 year contract with Pratt and Whitney,” said IAM Eastern Territory General Vice President David Sullivan. “With the membership education and committee preparations, Local 700 and 1746 teams succeeded in shoring a substantial agreement. I couldn’t be more proud of their efforts.”

The IAM District 26, Locals 700, and 1746 negotiating committees began preparing for contract talks more than six months ago, including the Negotiation Prep program offered by the Winpisinger Education and Technology Center in Southern Maryland. This program helps committees prepare for contract negotiations by focusing on the training of contract language, strategic planning, contract costing, and negotiation simulation.

“Our membership was adamant that job security was their top priority,” said IAM Aerospace General Vice President Mark Blondin. “The negotiation team from both locals worked together to secure job security language and other improvements for their members – this is the power of a well-informed committee and membership.”