April 2006 Sister of the Month

April Sister of the Month:
Eveleyna U. Washington 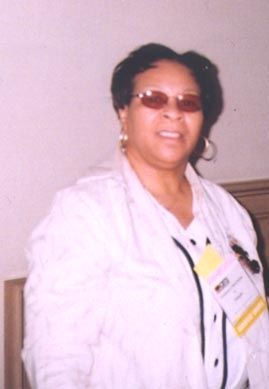 Sister Eveleyna Washington has served on the Executive Board for Local Lodge 851 as Sentinel and now Trustee for the last 9 of her 31 year career as a Machinists Union member.

As a Materials Specialists with Caterpillar, Inc., Sister Eveleyna became more involved in her local because of her association with the Coalition of Black Trade Unionists (CBTU) – a national AFL-CIO constituency group seeking to bring all the strengths and varied talents of African American Trade Unionists to bear, in the unending effort to achieve economic, political and social justice for every American.  Believing that if no one stands up to speak on your issues, they won’t get addressed; Eveleyna attended meetings, became a steward, and served as a voice for the membership.

Knowing that “Quitters never win and winners never quit,” Eveleyna overcame obstacles with determination and a positive outlook.  Rather than accept defeat, she kept her focus and used the experience as a tool to decide what to do better next time.  She is a community activist and a pioneer of women’s accomplishments.  She is the first woman elected to Local 851’s Executive Board and to hold the office of Will County Deputy Registrar.  In addition, she is a National CBTU Executive Council Member and the President of the Joliet Chapter of CBTU, a lifetime member of the NAACP, as well as the chairperson of her lodge’s women’s committee.

Eveleyna recommends that anyone wanting to get more involved stand firm on issues that matter, stay focused on your goals and when faced with adversity – press forward.

When thinking about getting involved with the union, Noreen advises others, “do your best… put interest of the group ahead of personal interest.  Don’t promise results you can’t produce, only promise to try your best, listen to what people have to say and get back to them as soon as possible.