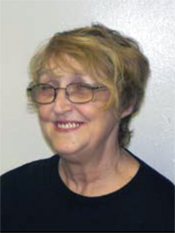 IAM Sister Nettie Hall is a 30 year veteran with the IAM.  Twenty of those years have been dedicated to serving the on the executive board for Local Lodge 1165 in Lincoln, IL.  Currently, she is serving as the Recording Secretary, but has previously served as Trustee.

Employed in the trade as an Assembler at Eaton Electric, Sister Nettie first became more involved in the IAM because she wanted to know more about the union that represented her. Asking questions, lead to being involved; more questions and more involvement.  Sister Nettie says, “I wanted to learn so much.  Thirty years ago I asked so many questions and grew into a devoted trade unionist… I love it!”

For other sister looking for a direction and a way to become more involved, Sister Nettie advises to start by being a steward.  Get training, ask questions, work your way up.  It’s a choice she made 30 years ago and hasn’t regretted.