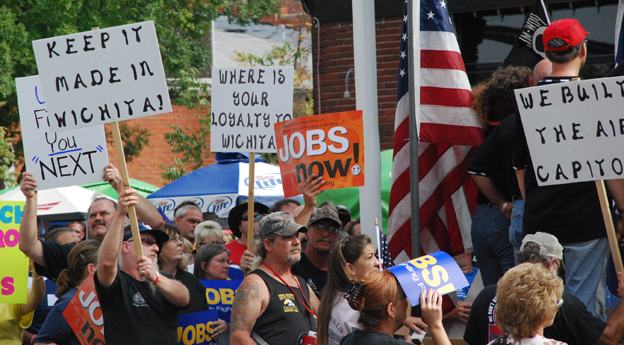 Hundreds of of District 70 members and supporters in Wichita, KS, rallied for jobs and a fair contract with Cessna.

“When negotiations started with Cessna, the IAM committed to partner with the company to survive the current recession, and to save and create jobs for the future,” said Southern Territory GVP Bob Martinez. “It soon became obvious that the parent company Textron had a radically different agenda.”

IAM members of Local 774 in Wichita, KS, are weighing a seven-year takeaway contract offer from Cessna that is devoid of any wage increases for the first four years for anyone, and no increases for 25 percent of the membership. Instead, the company proposed a “performance pay” system that would be managed exclusively by management, which may never pay a dime. Members vote on the offer Saturday.

Textron demanded gutting the traditional health care plan and replacing it with by a “consumer-driven” plan that raises premiums by as much as 160 percent and will cost members $5,000 a year before coverage finally kicks in. All future increases in health care will be passed on to the membership, as there are no caps and the company can change the plan design at any time.

The Local 774 Negotiating Committee unanimously recommended that members reject the company’s proposal and authorize a strike when the current agreement expires at midnight on September 19, 2010.

“It is clear Textron was not interested in breaking new ground in saving jobs in Wichita, but instead demanded concessions and takeaways with no real guarantee of keeping significant work here,” said Martinez. “This is a fight we must win, and I will commit the full resources of the Southern Territory to ensure that we prevail.”