Fighting for Relief for Every Member 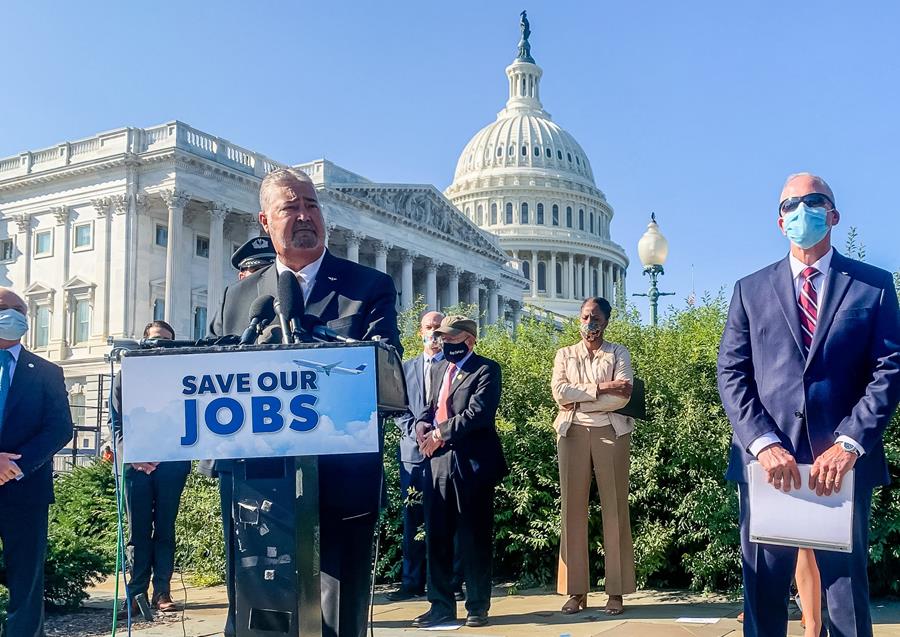 AS CORONAVIRUS AID TALKS STALL, MACHINISTS URGE IMMEDIATE AIRLINE RELIEF EXTENSION: The IAM is urging an immediate, standalone extension of expired airline worker relief, known as the Payroll Support Program (PSP). Tens of thousands of airline workers were furloughed at midnight on Thursday, October 1 after Congress could not come to terms before aid from the CARES Act ran out.

Reports on Thursday indicated that negotiations for an overall relief package remained far apart. Without consensus to help all Americans, the IAM is urging immediate passage of standalone legislation to extend the airline PSP.

Read the IAM’s letters to the House and Senate.

“As negotiations continue today on a relief package, our members are now facing the grim reality of trying to survive during the global pandemic without a paycheck and health care benefits,” said IAM International President Robert Martinez Jr. “We have long supported the bipartisan negotiations to pass a comprehensive relief package to help all American workers and affected industries through the economic distress of this global pandemic, but time has run out for airline workers that we proudly represent. It is past time for Congress to act. We must act now.”

Both American Airlines and United Airlines proceeded with more than 32,000 furloughs beginning Thursday. Both airlines have agreed to rescind furloughs if federal aid is approved in the next few days.

“How much more nonsense and political posturing must the working people of our country have to endure?” said IAM Transportation General Vice President Sito Pantoja. “Our members risk their health every day to move people and goods across this country. I encourage every Machinist to loudly let Congress know how you feel.”

Here’s how you can still help save thousands of airline jobs: 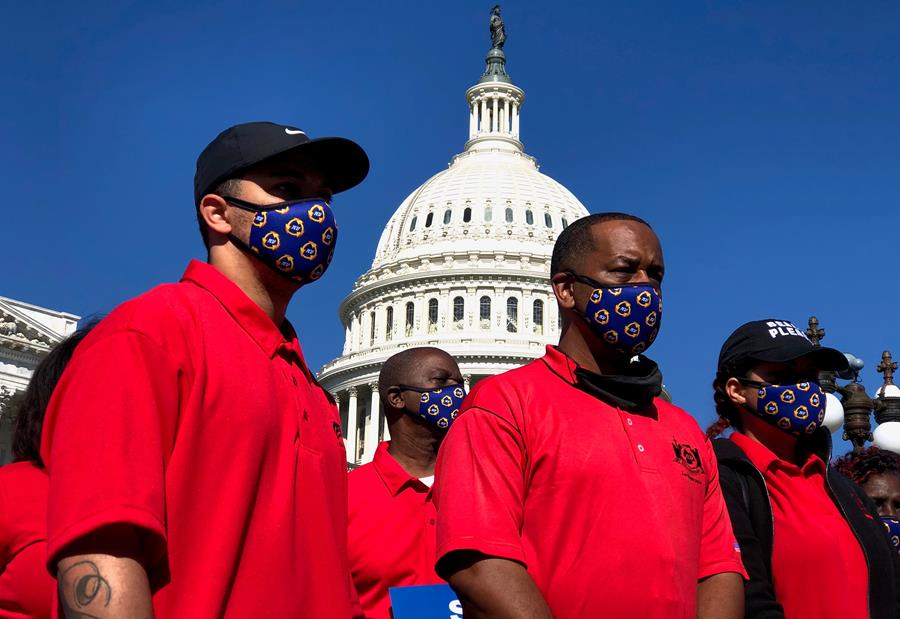 “It makes little sense to reposition employees, as many follow their craft and/or seniority, only to have a pending relief bill undo those maneuvers in the coming days,” wrote TCU/IAM National President Artie Maratea in a letter to Amtrak’s CEO. “Many of my members have expressed concern regarding the necessity to relocate in order to retain their work, only to have to return should Amtrak relief pass.”

“All of us here demand a comprehensive transportation aid bill that protects not only Amtrak but the entire transportation industry,” the group said. “Together we can speak as one powerful voice… and use that voice if nothing is done…by voting on November 3rd… to get that message across … Thank you to everyone across the country who is protesting with us today to demand action now, not in two weeks but NOW!” 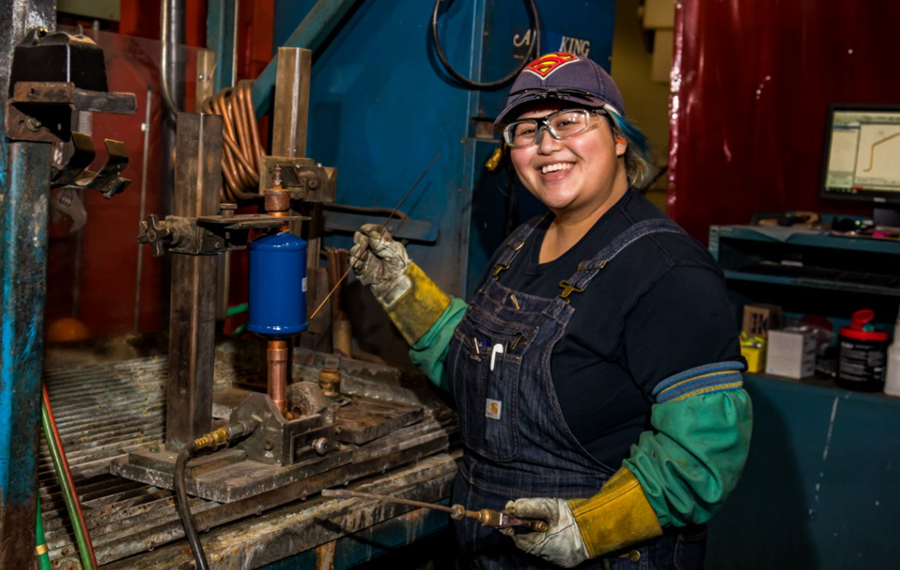 “Working families across the nation are feeling the brunt of the pain and uncertainty that the COVID-19 pandemic has thrust onto all of our lives,” said IAM International President Robert Martinez Jr. “The Machinists Union strongly agrees that a comprehensive package in response to this public health and economic crisis is vitally needed.”

The IAM, however, does not support a proposal in the legislation, known as the GROW Act, which would hurt multi-employer pensions.

Read the IAM’s letter to the House supporting the revised HEROES Act.

The changes center around codifying language to the Act to prevent any agency waivers (i.e., exceptions) to the Maximum TeleWork mandate in the law. The new language requires federal agencies to allow all telework-eligible federal workers to telework full-time for the duration of the COVID-19 public health emergency. 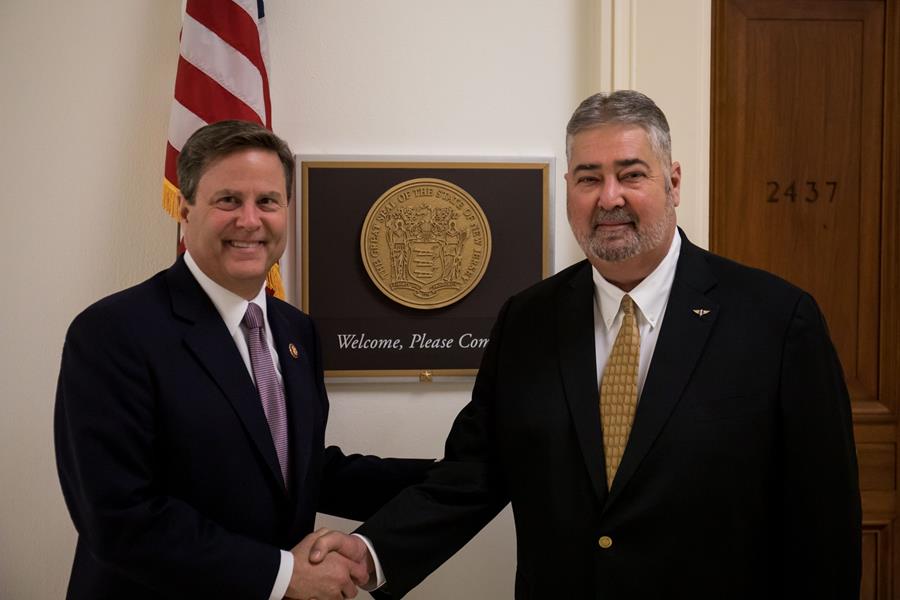 The group wrote an op-ed published by Defense News explaining the commonsense plan to source more parts from American-made manufacturers and build more with U.S. labor.

In July, the IAM, along with Norcross, championed the NDAA amendment that expands Buy American requirements for defense procurement to 100 percent by 2026. Currently, only 50 percent of defense production is required to be produced domestically, not counting frequent exceptions to the law.

“By building more defense system component parts in the U.S., we will be utilizing taxpayer dollars here at home rather than sending that money abroad, and we’ll foster a new generation of well-trained, well-paid, American workers,” the op-ed states. “Our defense industrial base must be viewed as an inherent component of our national defense.”

The article goes on to state that “the Buy American reforms under consideration in Congress strike the right balance between economic cooperation and comingled supply chains with the needs of the American worker and ensuring our national security in an uncertain world.”

MACHINISTS PUSH FOR TWO IAM-BUILT VIRGINIA-CLASS SUBS: The IAM is advocating for a second Virginia-class submarine to be approved in National Defense Authorization Act negotiations between the House and Senate. The IAM cites broad support by U.S. Navy leadership for the second submarine.

“The restoration of funding for this second submarine would provide the Navy with the resources it needs to continue rebuilding our nation’s dwindling fleet of fast-attack submarines, while bolstering our domestic industrial base and creating high-quality jobs in the U.S. shipbuilding industry,” wrote IAM International President Robert Martinez Jr. in a letter to House and Senate Armed Services Committee leadership.

IAM DISTRICT 751, CONGRESSIONAL ALLIES SAY BOEING WRONG ON 787: The Boeing Co. on Thursday made official its decision to consolidate production of the 787 Dreamliner in South Carolina.

“IAM District 751 believes this is the wrong decision and just another in a string of bad decisions Boeing has made that fails to capitalize on the strengths of our workforce,” said IAM District 751 President Jon Holden. “Boeing leaders discount the efficiency, quality and productivity of our Puget Sound workforce.”

Boeing management chose to end 787 production in the Puget Sound, despite an objective study showing that Washington State remains far and above the best place for aerospace design and manufacturing.

“For decades, talented and dedicated engineers, machinists and workers across our region proudly contributed their skills and ingenuity around the clock to power Boeing, our economy and this country to new heights,” said U.S. Rep. Pramila Jayapal (D-WA). “The company’s misguided decision to dishonor workers throughout the Pacific Northwest by turning their back on our region is wrong.”

“Boeing’s decision to pull its 787 production out of Washington state is shortsighted and misplaced,” said U.S. Rep. Rick Larsen (D-WA). “The Pacific Northwest is home to the best aviation and aerospace workforce in the world.” 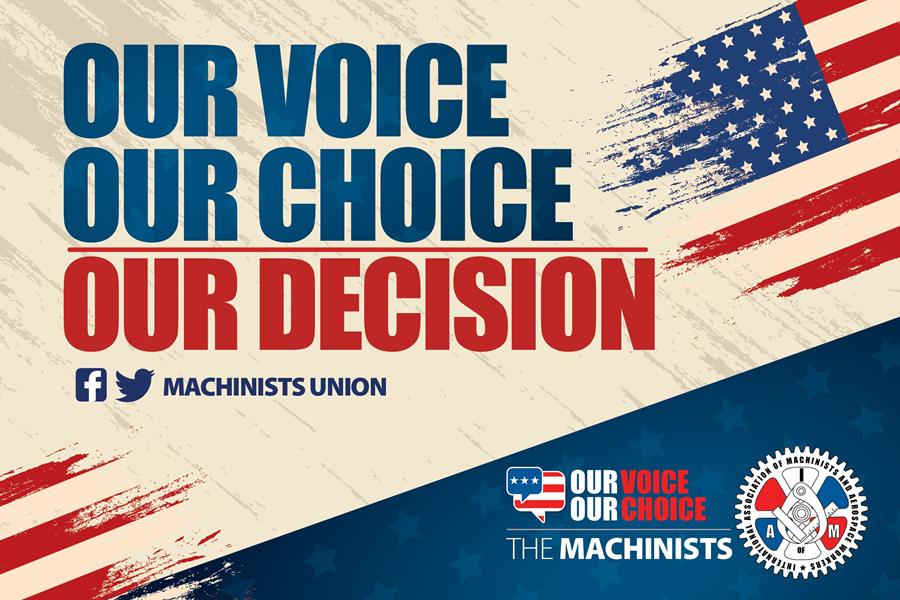 IAM LAYS OUT STAKES IN 2020 ELECTION: In a new post on the IAM’s online 2020 election hub, IAM members can see exactly why this election is so important.

Politics affects everything about our lives. Legislation enacted and decisions made by elected officials impact our work lives and the ability of our union to fight for better pay and benefits for our families. There is a direct link between the ballot box and our economic and workplace security—and the enemies of working people are more engaged than ever in trying to destroy us.