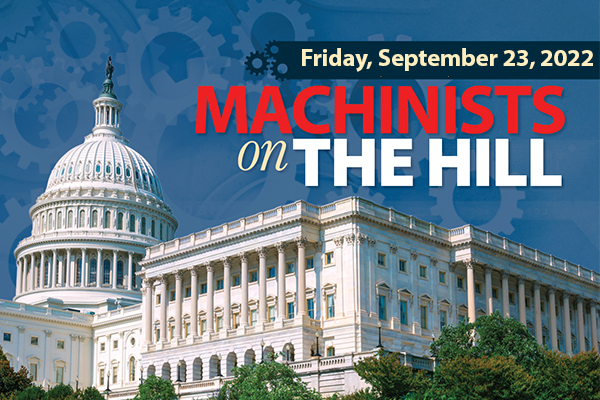 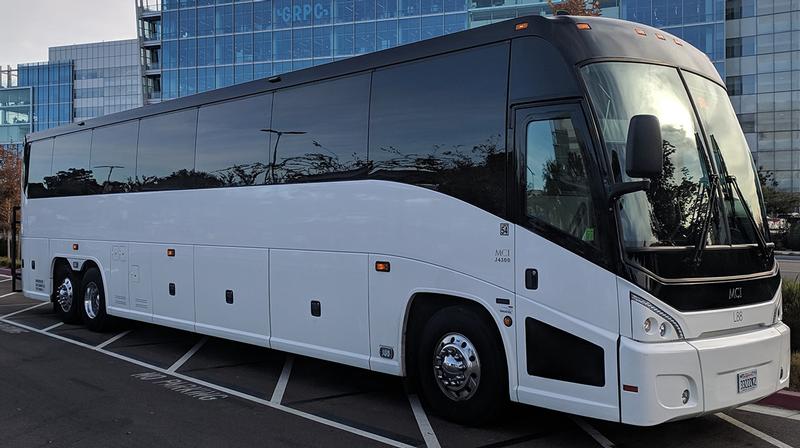 NORTH DAKOTA CONGRESSIONAL DELEGATION JOINS FIGHT TO SAVE 175 MACHINISTS UNION JOBS AT MOTOR COACH INDUSTRIES IN PEMBINA, N.D.: Approximately 175 members of IAM Local W384 (District 5) at Motor Coach Industries’  (MCI) Pembina, N.D. plant were told they will be out of work by the end of the year due to the company’s decision to close the facility.

Now, members of the North Dakota congressional delegation are asking MCI to reconsider their decision to close the Pembina plant. U.S. Sens. Kevin Kramer (R-N.D.) and John Hoeven (R-N.D.), along with U.S. Rep. Kelly Armstrong (R-N.D.) expressed serious concerns about how the closure of the facility, which has been in Pembina since 1963, will significantly affect the livelihoods of the nearly 200 employees currently working at the plant.

“While we understand that domestic and global sales environments are key drivers in business decisions, we believe MCI’s Pembina Assembly Plant and its workers produce a top-quality product, and they should continue to have the opportunity to manufacture in North Dakota,” reads the letter from the North Dakota congressional delegation.

Read the full letter from the North Dakota congressional delegation.

“We were just in shock thinking back to all the things we’ve  been told, the broken promises — how we’d never close because we were paid for and have so much to offer this community — things like that,” IAM Lodge W384 President Jennifer Winkler told the Grand Forks (ND) Herald.

Since the announcement of the plant closure in Pembina, the future of the employees, and the surrounding communities who will be effected by this devastating decision have been in question, said IAM District 5 Directing Business Representative Jeremy Pearson. “The fact that the North Dakota congressional delegation has reached out to MCI to try and change their minds means the world to those who’s lives will be so dramatically changed as a result of the decision to close the facility.  We hope that this letter of support will show MCI how valuable this facility is to, not only the employees and the surrounding communities, but also to the state of North Dakota.The loss of 175 family-supporting jobs in Pembina, with a population of just over 500, will have a major impact on the area economy and the surrounding communities.

“We applaud the members of the North Dakota congressional delegation for standing up for our members at the MCI plant in Pembina,” said IAM Midwest Territory General Vice President Steve Galloway. “Their support carries a lot of weight in the state and it is our hope that MCI reverses its decision which in its current state will devastate the lives of 175 IAM members, their families, and the surrounding communities. Our union will continue to fight to protect these highly-skilled jobs and to avoid this facility shutting down.”

The North Dakota congressional delegation has expressed their desire to work with MCI, IAM members in Pembina, and state and local officials, to preserve these jobs and ensure the continued success of the MCI manufacturing facility. 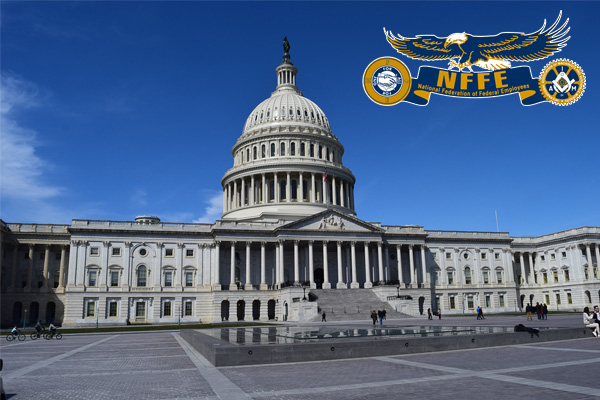 NFFE-IAM ENDORSES LEGISLATION TO PREVENT PARTISAN TAKEOVER OF CIVIL SERVICE: Last week, the National Federation of Federal Employees (NFFE-IAM) sent a letter to the U.S. House of Representatives requesting that members of congress vote for the Preventing a Patronage System Act (H.R. 302) expected on the House floor this week. The bipartisan legislation aims to protect the merit system principles of the federal workforce by preventing U.S. president from requiring political loyalty from the apolitical career ranks of federal civil service. The bill was drafted in response to the establishment of Schedule F during the last presidential administration, a new classification of political employee that can be hired into permanent positions without regard to existing laws governing federal employment and accountability.

“Federal labor, executives, and professional associations all agree with political appointees from former Democratic and Republican administrations that this bill is critical to ensuring the government remains in the hands of the American people and not some political despot, even if that despot is a president,” said NFFE-IAM Executive Director Steve Lenkart. “This bill describes an incredibly wonky policy issue that is difficult for the average American to embrace, but should the day arrive when federal workers are forced to genuflect before a corrupt system or leader, we will all endure a brutal and horrifying crippling of American democracy.” 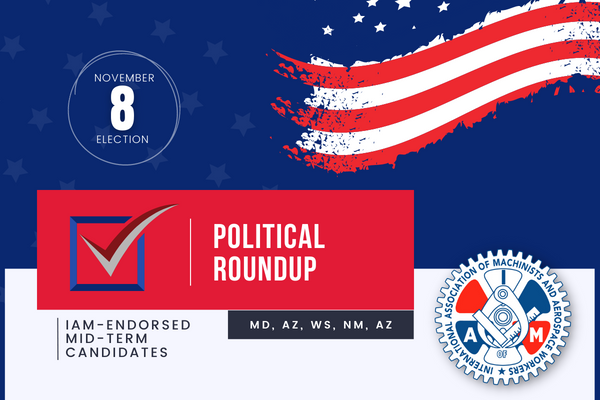 Here are some of the photos with IAM members and the IAM endorsed candidates: 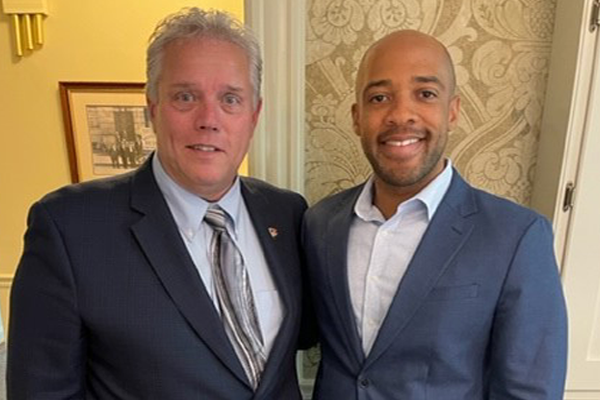 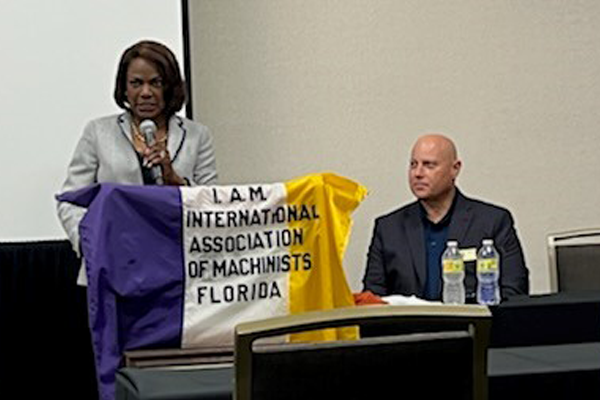 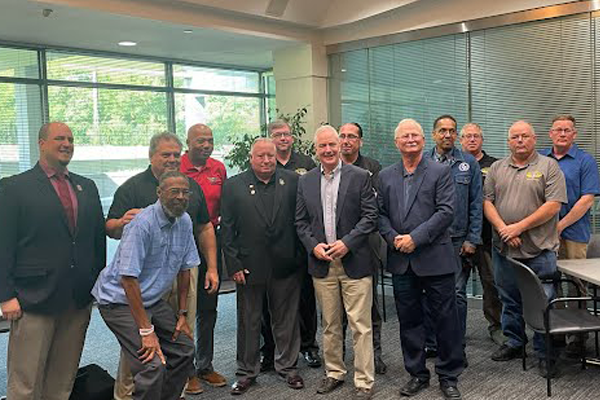 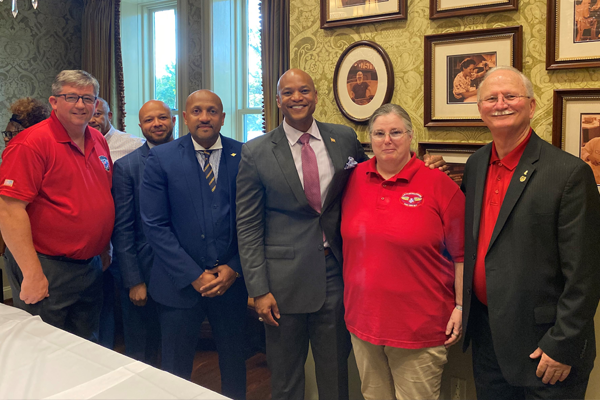 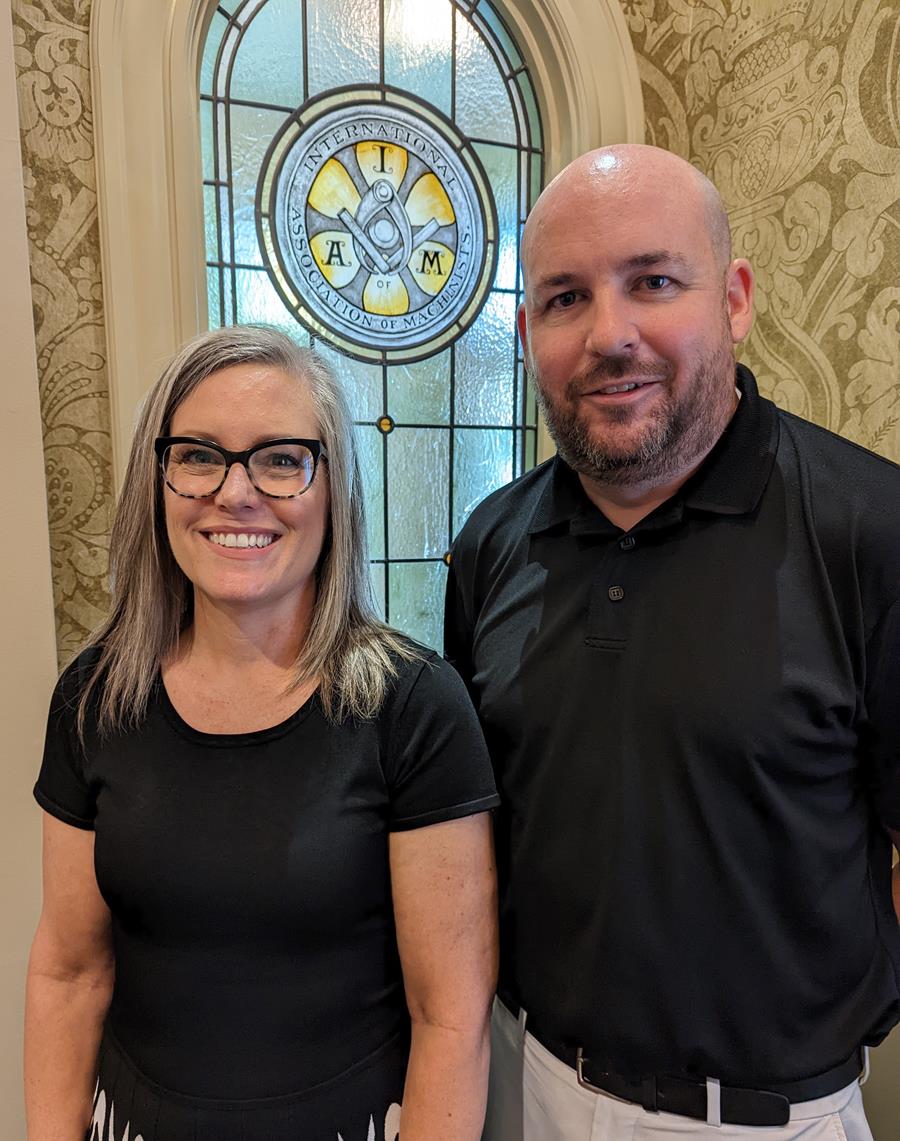 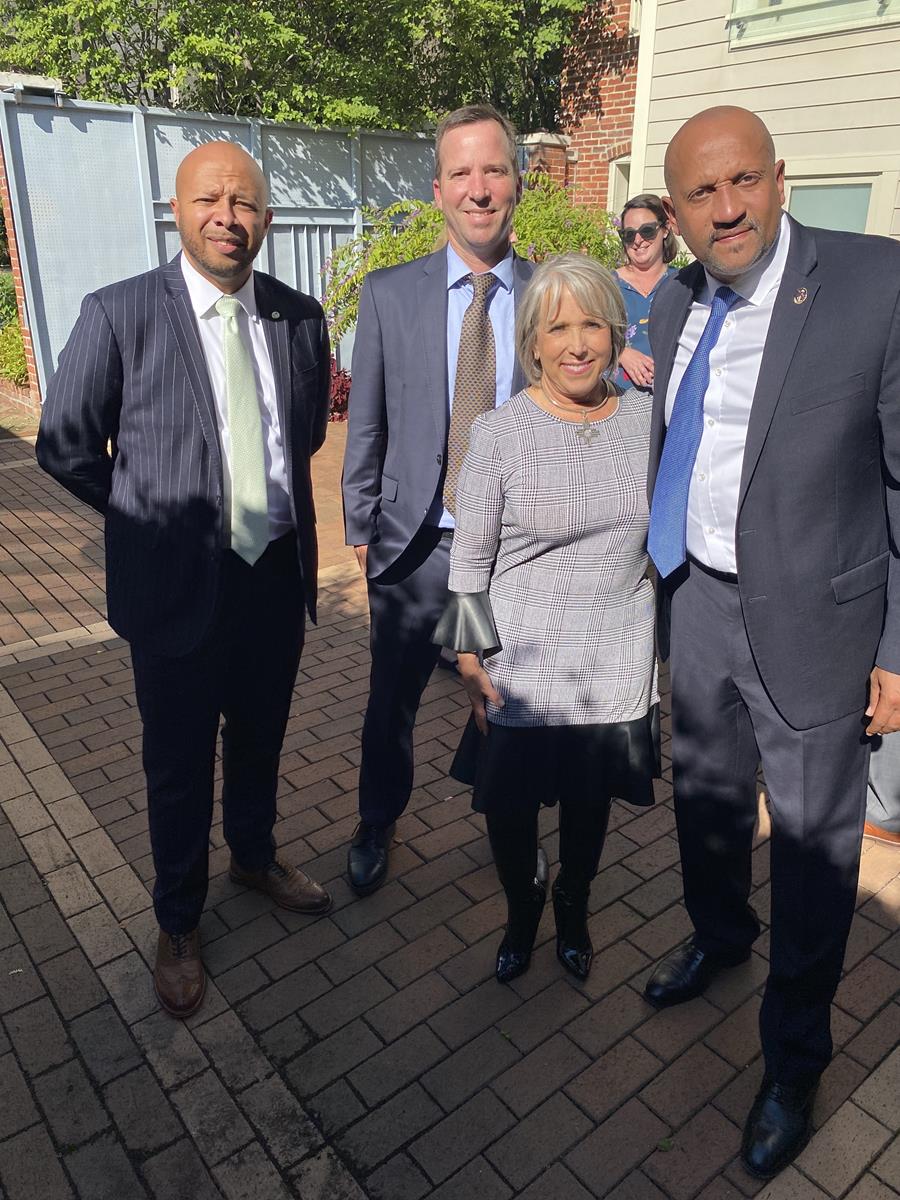 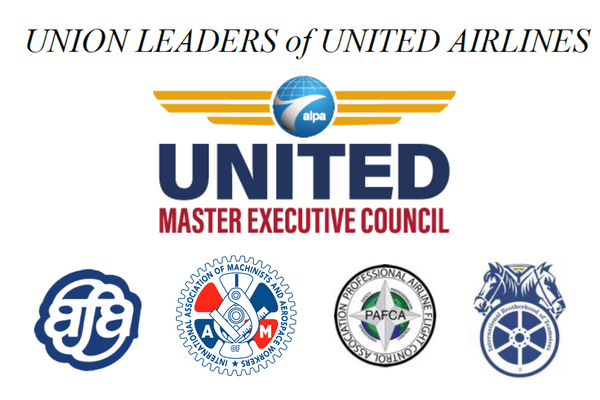 UNITED – EMIRATES CODESHARE: LABOR IS WATCHING: “That’s evidence that they are not focused on profitability. They are just focused on flying the airplane somewhere and having the government subsidize it.” –United CEO Scott Kirby

To protect the jobs of U.S. airline workers, there must be continued financial transparency and improved labor standards that ensure fairness is maintained in all Open Skies and codeshare agreements.

Since the beginning of their existence, Emirates Airlines has been sustained by massive government subsidies, unrelated to the global pandemic, used to expand far beyond what market forces could ever support. Their growth, including the Dubai-Athens-Newark service and Milan service, was only possible because of the enormous Emirati funding the airline received. These subsidies put U.S. airlines at a tremendous economic disadvantage and threaten U.S. airline workers’ jobs. American workers can compete with any foreign airline when on a level playing field. We cannot compete against entire countries.

Although the United States and United Arab Emirates signed an agreement in 2018 regarding these issues, the fact remains that there are currently no independent labor unions in the United Arab Emirates. This has led to a systemic, unacceptable assault on airline workers’ rights, with alarming accounts of unfair labor practices and intimidation by employers.

United Airlines employees and union leadership will be watching closely to ensure our scope provisions are rigorously followed and demand the highest labor standards are adhered to across all partnerships. We will act swiftly if needed to protect our long-term career security. 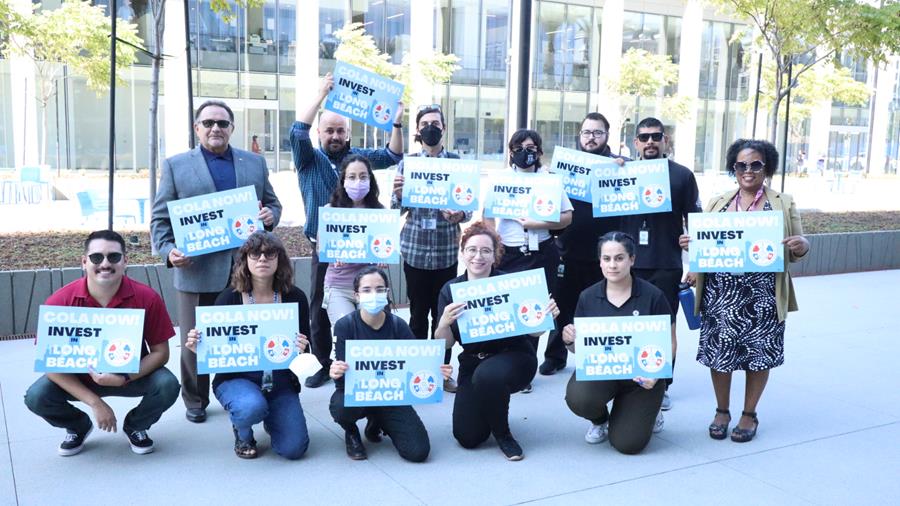 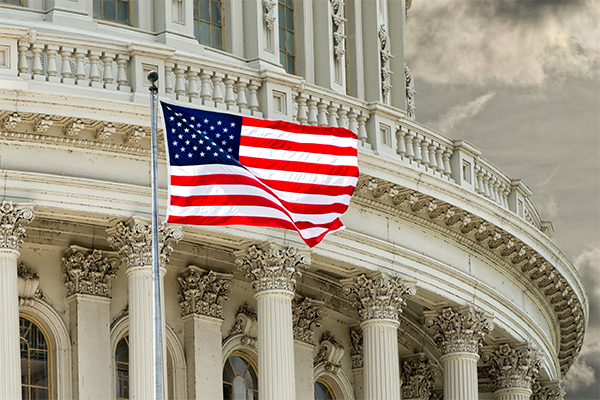 “I want to thank Education and Labor Chairman Bobby Scott for holding this very important hearing, which highlights the many hurdles that workers in the U.S., must endure just to exercise their constitutional right to join a labor union,” said Martinez. “Our nation is long overdue for federal labor law reform that finally tilts the pendulum away from favoring corporations that work overtime with efforts to keep employees from collectively bargaining. Barriers such as the so-called right-to-work laws suppress wages and that is simply unfair. Today’s committee hearing also once again illustrates examples of why Congress should pass the Richard L. Trumka Protecting the Right to Organize (PRO) Act, which would help break down the barriers for working people to join unions. The PRO Act has already passed the House, and it’s time for the Senate to do the same.

“Today’s hearing also shows the need to increase funding for the National Labor Relations Board (NLRB), to keep pace with the uptick in union representation elections and unfair labor practice complaints. The IAM firmly supports making sure the NLRB has the personnel and other resources needed to adequately ensure workers can exercise their right to join a labor union.” 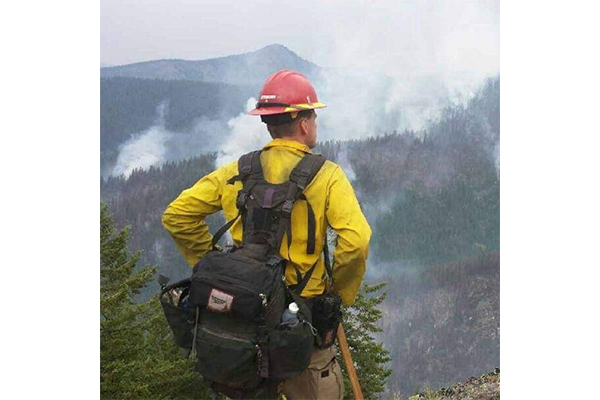 NFFE-IAM RESPONDS TO USDA WITH LETTER ON WILDLAND FIREFIGHTER RETENTION SOLUTIONS: This week, the National Federation of Federal Employees (NFFE-IAM) responded to correspondence from the U.S. Department of Agriculture’s (USDA) Secretary Tom Vilsack with a letter outlining solutions and next steps to help alleviate retention problems among federal wildland firefighters. The proposed solutions include permanent pay raises, increased funding and staffing, and the development of a robust occupational series, among other things.

“NFFE, Secretary Vilsack, and other leaders within USDA have a great working relationship and a commitment to reforming the wildland firefighting workforce for a better future,” said President Erwin. “However, it was necessary to share the concerns that we were hearing from our members on pay, the occupational series, and other issues. As we begin making policies to resolve these issues, it is critical that we address each problem as best as possible, and we do it right the first time. We are confident that Secretary Vilsack will join us in implementing solutions that NFFE wildland firefighters have recommended to meet the challenges we see today.”