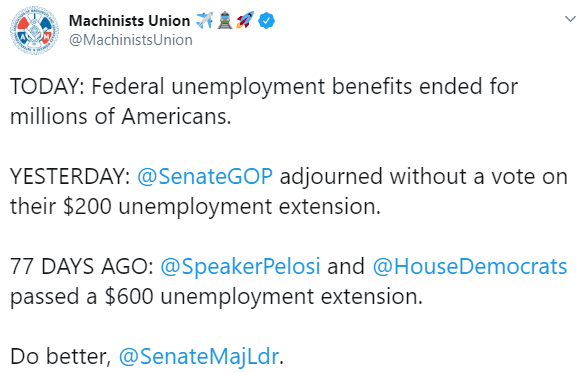 GOP’S HEALS ACT IS TOO LITTLE, TOO LATE: Nearly three months after the House of Representatives passed coronavirus relief legislation, the Republican-controlled Senate has finally offered their own proposal. Unfortunately, the relief package, known as the HEALS Act, comes up woefully short for millions of working families.

The HEALS Act’s shortcomings include:

“This legislation is a slap in the face to working people in this country,” said IAM International President Robert Martinez Jr. “They have no problem handing out a trillion dollars in tax cuts to corporations, but want to nickel and dime unemployed Americans at a time when they need it the most.”

Of course, as is the case with most legislation, the HEROES Act is not perfect. It includes pension language, known as the GROW Act, which would weaken multi-employer pension plans. The IAM is working to remove this harmful language from the HEROES Act.

HOW TO TAKE ACTION 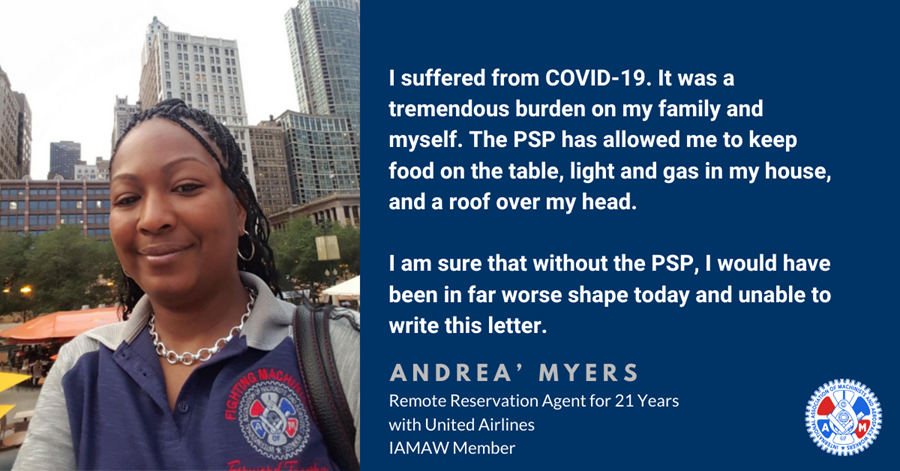 SUPPORT GROWS FOR EXTENDING AIRLINE WORKER SUPPORT: The IAM, along with a coalition of airline unions, are gaining momentum on Capitol Hill. After securing support from a bipartisan majority of the U.S. House, the IAM needs your help convincing the Senate that they must act now to save hundreds of thousands of airline jobs before funding runes out on October 1.

The IAM sent a letter this week to every member of the U.S. Senate encouraging them to support a clean extension of the airline Payroll Support Program, resulting in 16 GOP Senators, led by Sen. Cory Gardner (R-CO), throwing their support behind the program. Democratic Leader Chuck Schumer (NY) has already pledged his caucus’s support for a clean extension.

President Trump endorsed the program at a White House press conference on Wednesday.

“The continuation of this program is vital to protecting the livelihoods of thousands of Machinists come October 1,” said IAM Transportation General Vice President Sito Pantoja. “The IAM will continue to lead the fight on Capitol Hill to ensure our members’ futures.”

The airline Payroll Support Program, passed in the CARES Act, has saved nearly 1 million jobs already, but an extension of the program through March 31, 2021 is imperative to keep the industry afloat.

“This critical program has been a success and we must extend it,” said IAM International President Robert Martinez Jr. “The Payroll Support Program has kept our members and hundreds of thousands of airline workers and their families off of unemployment rolls and on payrolls.”

IAM PRESSURE FORCES BATH IRON WORKS BACK TO TABLE: After a rousing union rally and mounting political pressure, Bath Iron Works, a subsidiary of General Dynamics, returned to the negotiating table to work toward a deal with 4,300 striking IAM Local S6 shipbuilders in Maine.

IAM Local S6 has been on strike since July 22 after the company refused to back off proposals to outsource good Maine jobs and gut seniority rights. The local negotiating committee and the company have made progress on several articles in the contract since returning to the table Monday, August 3.

BIW was six months behind production schedule before the strike began and is falling further behind every day.

78 BIPARTISAN HOUSE MEMBERS TELL LEADERSHIP TO FUND AMTRAK AND TRANSIT NOW: A recent letter to Senate and House leadership, led by U.S. Reps. Seth Moulton (D-MA) and Brian Fitzpatrick (R-PA), was joined by 76 of their colleagues in support of emergency funding for Amtrak and transit nationwide.

The letter specifically calls for $8 billion in emergency aid to Amtrak and $32 billion for transit agencies. Importantly, the letter supports the retention of the Amtrak workforce and long-distance route frequencies.

STANDING UP FOR BOEING WORKERS: After news that Boeing is cutting or delaying commercial production on multiple programs, the IAM and a powerful ally in Congress are pledging to support IAM members and all workers at the aerospace giant.

“Whether you work in Everett or North Charleston, we are all performing the same work, providing for our families and just trying to get ahead; most certainly proud of the work we perform and the airplanes we build,” said IAM District 751 President Jon Holden. “Our union continues working to provide resources and support to our members getting laid-off so they can get back on their feet as quickly as possible.”

Boeing is projecting rate reductions for the 737, 777/777X and 787, as well as announcing that 747 production will end in 2022. Along with a slower production rate for the 787, Boeing CEO David Calhoun revealed that Boeing is launching a study to consolidate all 787 production in one location.

“I am committed to helping our region work back to full strength and remain the aerospace capital of the world,” said U.S. Rep. Rick Larsen. “The U.S. aviation economy must plan for the future and be ready to act when the nation gets to the other side of this pandemic.”

NFFE-IAM FIGHTING TO SAVE CRITICAL RED RIVER PROGRAM: House Defense Appropriators are proposing to send the Rollover Mitigation Retrofit Program, currently located at the Red River Army Depot (RRAD) in Texarkana, TX, to a military facility at Rock Island, IL. The move would result in the outsourcing of more than 100 jobs at RRAD.

The program performs modifications to the High Mobility Multipurpose Wheeled Vehicles (HMMWV) to prevent older models from rolling over, a vehicle defect that has injured and killed soldiers while deployed.

Both chambers of Congress support the work remaining at RRAD within the 2021 National Defense Authorization Act. The focus now is on Senate Defense appropriators.

NFFE-IAM Federal District 1 initiated a letter campaign through its website.