PRO ACT CLEARS HOUSE CHAMBER: The U.S. House of Representatives on Thursday passed the Protecting the Right to Organize Act, or PRO Act, (H.R. 2474) in a 224-194 vote. The IAM has been a strong advocate of the bipartisan legislation, which was introduced in May by House Education and Labor Chairman Bobby Scott (D-VA) to remove state’s so-called right-to-work laws, broaden workers’ rights to strike and organize. IAM President Robert Martinez Jr., now calls on members to mobilize to ensure the Senate and the White House support the legislation as part of its so-called pro-worker agenda. The push comes as the Trump administration has threatened to veto the PRO Act. 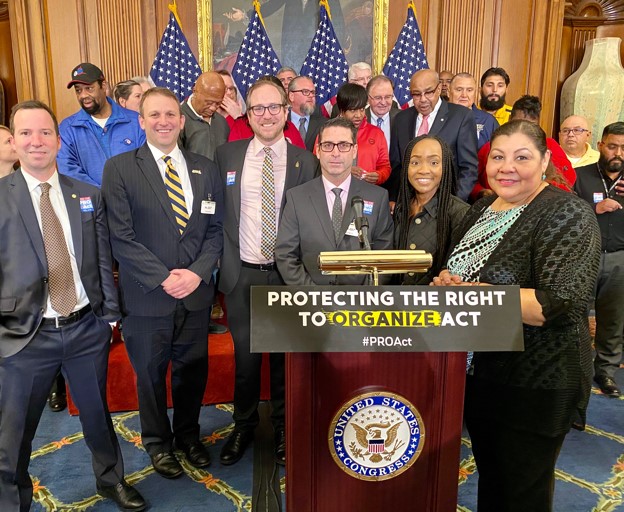 QUOTABLE: “I want to thank the Democratic leadership team, House Education and Labor Chairman Bobby Scott (D-VA) and every member of Congress who voted in support of the American worker. This legislation will have a chilling effect on the negative attacks and acts of retaliation present in many anti-union campaigns like IAM’s ongoing campaigns at Delta Airlines and Boeing South Carolina.” – IAM President Robert Martinez, Jr.

IAM LOCAL PRESIDENT ATTENDS SOTU: Rep. Jared Golden (D-Maine) invited Chris Wiers, president of IAM Local S6 in Bath, ME as his guest at the recent State of the Union Address. Wiers, who was elected the local’s president in 2019, said his attendance at the Feb. 4 event was to represent the proud shipbuilders of Local S6 and drive the discussion about “bargaining and organizing and strengthening that conversation.” 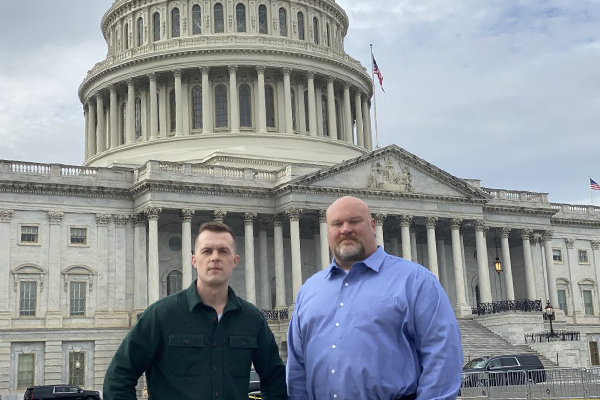 QUOTABLE: “Local S6 is a great example of what unions do for Maine workers. Chris and I believe that strengthening unions is one of the most effective ways to help working Mainers get ahead and ensure they have dependable, good-paying jobs with solid benefits and a safe workplace.” – Rep. Jared Golden.

TCU FIGHTS FOR UP JOBS: TCU’s Legislative Department has been meeting with the Texas Congressional delegation in Washington D.C., to discuss ways to ensure railroad jobs stay in Palestine, Anderson County. Union Pacific is seeking to void a longstanding employment agreement, which states in exchange for bonds, a certain percentage of the railroad’s jobs must be located in Palestine. The union is outraged as our Clerk, Carmen, Machinists, and ARASA members that stand to lose their jobs if Union Pacific leaves town.

IAM-NFFE WINS LOBBIED PRIORITIES: The National Federation of Federal Employees (IAM-NFFE) celebrates its end-of-year legislative victories on behalf of federal employees stemming from the May 2019 IAM Legislative Conference in Washington D.C. NFFE claimed victory on seven out of eight legislative week priorities. Big wins include an annual pay increase, no cuts to federal pensions, a new 12-week parental leave benefit, defeating a move to close 26 NFFE-staffed Job Corps centers, and winning four out of five provisions favorable to federal employees in the National Defense Authorization Act. Advancements were made also on a first responder retirement bill, and a buy-back bill allowing temporary and seasonal federal employment to count toward retirement.

IAM STILL WATCHING USMCA DEAL: President Donald Trump’s recent signature on the United States-Mexico-Canada Agreement, or USMCA trade pact does not close the chapter for the IAM. The Machinists, a vocal critic of the renegotiated trade pact, will stay vigilant to ensure labor-related provisions are enforced in the new deal. The IAM has said the pact stops short of ensuring outsourcing protections for important sectors like aerospace and general manufacturing.