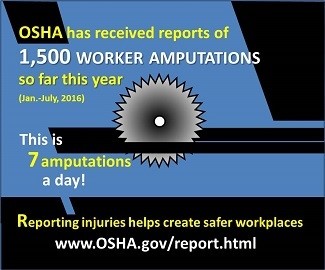 OSHA’s severe injury reporting requirement, now in its second year, continues to show a disturbing trend of seven reported amputations a day at U.S. workplaces. The positive news is that the reports are leading to inspections, citations, and agreements with employers to make changes that will protect many more workers from injury.

An analysis of the first full year of the requirement, under which employers must report any worker’s hospitalization or amputation, showed that 2,644 amputations were reported in 2015. So far this year, as of July 31, OSHA has received 1,500 amputation reports. The rate works out to be about 7 amputations per day for both years.

Some resulting inspections found pervasive violations at worksites, but as part of a settlement process, employers have agreed to make extensive worksite improvements. Schwan’s Global Supply Chain created a comprehensive safety and health program for all its facilities nationwide, and hired a professional to run it, after two workers suffered amputations in less than three months. Ohio Gasket & Shim Company agreed to use OSHA’s On-site Consultation Program and implement a comprehensive safety and health program, along with other specific improvements, after a worker lost three fingers in an unguarded machine press.

“In case after case, the prompt reporting of worker injuries has created opportunities to work with employers that we wouldn’t have had otherwise,” said OSHA Assistant Secretary Dr. David Michaels. “The result is safer workplaces for thousands of workers.”