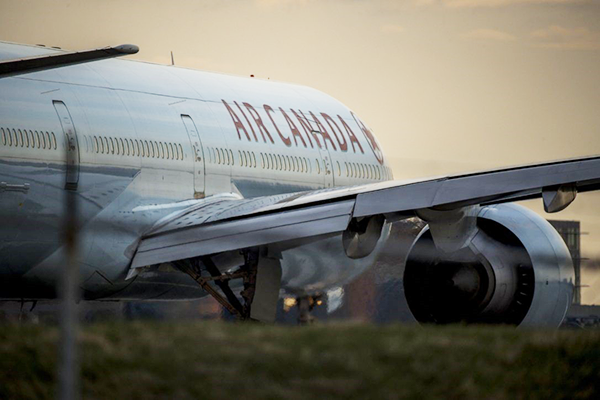 The female passenger was burned by her phone, which caused a minor fire on board the aircraft.  She suffered burns to her hands after her cellphone caught fire on an Air Canada flight while it sat on the tarmac in Toronto, the airline said Thursday.

The incident happened around 7 a.m. as the plane was at a gate before its scheduled departure to Vancouver from Pearson International Airport, said Air Canada spokesperson Peter Fitzpatrick.

Fitzpatrick said the fire was immediately put out and the plane’s 266 passengers did not have to evacuate.

“It was very contained,” he said. “However, customers seated around the incident were invited to deplane so we could clean up the residue from the extinguisher.”

Paramedics said the woman suffered first-degree burns and was transported to a local hospital.

The flight was able to take off for Vancouver after a two hour delay, Fitzpatrick said, noting that the plane — one of the airline’s new Boeing 787 Dreamliner models — did not sustain any damage.

Joe Cressy, a Toronto city councilor, was one of the passengers on the flight, and described hearing yelling on board before seeing smoke in the cabin.

“Any time you’re in a plane and you look behind you and there’s smoke and yelling, there’s a moment of real concern and fear,” said Cressy. “But frankly, thanks to the exceptionally professional response of the Air Canada staff, that concern went away and we were up in the air in two hours.”

Cressy said that he shifted very quickly from worrying if he was in danger to wondering how long the delay would be.

“Had this happened while we were mid-flight, it would be a very different feeling,” said Cressy. “But the fact we were on the tarmac alleviated the situation to some degree.”

Robin Smith, a spokesman for the airport’s operator, said that while they haven’t heard of any phone-related fires at Pearson in the past year, phones catching fire are not entirely unheard of.

“In general terms, they’re not uncommon, because there have had to be rules made for the Samsung Galaxy Note 7,” said Smith, referring to a phone that was recently banned from certain flights because of the risk it could catch fire.

“Lithium battery volatile problems are enough of an issue that it’s a common topic of discussion and you see photos popping up online.”

There has been a rash of cell phone batteries catching fire. According to Consumer Reports, the U.S. Federal Aviation Authority estimates battery fires on planes occur every 10 days. Earlier this week, a portable phone charger caught fire in an overhead bin on a flight in China.

Steve LeVine, an adjunct professor at Georgetown University teaching energy security, said batteries contain flammable liquid, and, given the electrochemistry inside them, are extremely volatile.

“There are a bunch of coincidental reasons for the plane fires, such as a lot of batteries in the same place at the same time, all crammed into bags, sometimes loose and coming in contact with other loose, metal objects,” said LeVine.

He said incidents such as these are going to keep occurring until a solid-state, non-liquid battery system is made.

To prevent them from happening, owners have to keep the batteries either inside the device, in the container in which they were bought, or in a self-contained bag, LeVine said.

Donald Sadoway, a professor of Materials Chemistry in MIT, said there could have been a short circuit in the battery that caused it to heat up. And, as the battery got warmer, its internal resistance would rise, generating more heat.

Sodoway said, with the hot battery as the igniter and its flammable liquid as the fuel, the fire might have been triggered by the pressure from the phone being in the traveler’s pocket.

It wasn’t immediately clear what type of cellphone was involved in Thursday’s incident.