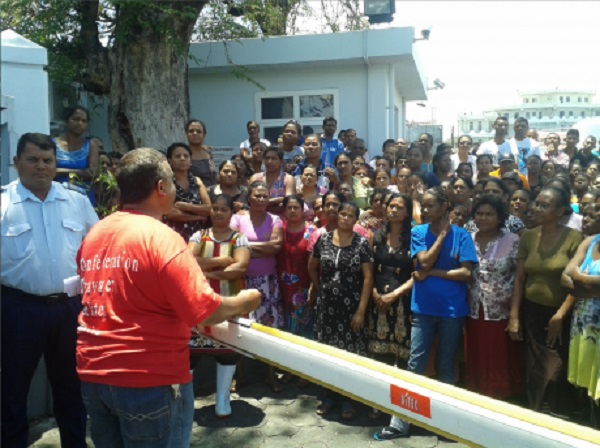 Nov 3, 2014 – As the exploitation of garment workers in Mauritius comes under fresh scrutiny in a British newspaper, the reality is in fact worse than reported says IndustriALL Global Union.

The Daily Mail exposé found that women garment workers producing a T-shirt with the
slogan “This is what a feminist looks like” for upmarket UK fashion chain Whistles, were earning just 1 US$ an hour and sleeping 16 to a room in bunk beds.

Union leader Jane Ragoo from IndustriALL Global Union Mauritian affiliate, CMCTEU, says: “It is outrageous. Just because a t-shirt is expensive and bears an ethical message, doesn’t mean it is made ethically. Garment workers in Mauritius, who are mostly women, are working very long hours on very low pay.”

A garment worker toiling six days a week will earn only 6,000 rupees (US$190) per month. Like anyone working in the export sector in Mauritius, they are bound by law to work 45 hours per week plus compulsory overtime of ten hours per week.

An estimated 65,000 people work in the textile sector in the country, of which around 15,000 are migrants. Many of them come from Bangladesh where wages are some of the lowest in the world.

“Migrants are forbidden to join a union so they can’t stand up for themselves as a group.  If they become ill and need surgical treatment, they are immediately sacked and sent home, even though there is supposedly free health care in Mauritius.  The Ministry of Labour sanctions their dismissal by withdrawing their working permit. There is no possibility to appeal before a court of law.”

Compagnie Mauricienne de Textile (CMT), the textile company implicated in the tabloid story, employs 10,000 workers, of which many are migrants.

“Authorities inspect the company lodgings for migrant workers, granting permission for a limited number of people per dwelling. The problem is that the textile companies will then overcrowd the dormitories, meaning the women lack any privacy or even space to put
their clothes and belongings,” reveals Ragoo.

Unions in the country are campaigning for a national minimum wage of 9,000 rupees (US$284) a month for all workers. However, even this is way below the estimated
monthly living wage is 14,500 rupees (US$458).

Minimum wage increases in Mauritius are made at the discretion of the labour Minister |
and have not been updated in most industries for many years.

“Exploitation of garment workers is rife, not just in Mauritius but the across the developing world. Fashion retailers make massive markups at the expense of workers while claiming to be socially responsible. The only way pay and conditions will improve for garment workers is if they have better rights and stronger employment laws – and that’s what unions are fighting for in all countries where clothes are made.”

DEVA HOLDINGS MUST STOP ATTACKING ITS WORKERS IN TURKEY

The latest violation committed by the company in its effort to stop its workers organizing is to ignore a direct and official edict from Turkey’s Labour Ministry. The government authority instructed the company on 14 October to recognize Petrol-Is and begin collective bargaining. Instead the company sacked three more workers for supporting the union.

“Let me tell you Mr Haas that our global organization comes across irresponsible employers around the world every day, but this corporate misbehavior by Deva Holdings represents total disrespect and disregard of your employees. This case puts Deva Holdings in breach of industry standards, OECD and ILO standards, of the Turkish labour legislation, and into the category of worst violators of labour rights.”

Already in 2010 Deva used a range of union busting tactics to dismantle a 40-year industrial relations system at plants in Çerkezköy, Kartepe and the Topkap? area of Istanbul. Deva Holdings sacked 74 employees at that stage in 2010 when they refused to replace their collective agreement with individual contracts.

Deva then sacked 8 more workers on 22 July, 2014 for exercizing their right to join Petrol-Is. A total of 24 sackings had occurred in this latest union organizing process.

The Deva corporate management has been sent thousands of protest messages already through LabourStart as part of the global campaign supporting the Petrol-Is organizing drive.

Despite the mass sackings and other illegal anti union pressure, Deva employees organized the required majority to then file for and receive the official ‘Certificate of Competence’ from the Turkish Ministry of Labour on 14 October, 2014. This official directive from the Turkish government instructs Deva Holdings to begin collective bargaining with Petrol-Is as its recognized bargaining partner.

But, instead of respecting the authority and findings of the Ministry of Labour, Deva management declared to its workers that the company will never recognize or bargain with any union in Turkey. And Deva’s now-established practice of sacking employees deemed to be key union supporters was used again. Details are below of these three latest workers to be sacked for supporting a union.

1) Ramazan Atasever: With one-and-a-half-year seniority. He was told that the reason of his dismissal was his physiological problems.

2) ?enol Aygün: With eleven years seniority. The apparent reason for his dismissal is that he does not possess a sufficient level of academic      qualifications for the technological processes required in his job. However, with eleven years service in his position, it is a non-credible excuse for sacking someone for supporting a union.

3) Hasan Yi?it: With seven years seniority. He was told that he was dismissed because of his earlier records inside the company. This once again sent a message to the workforce that they will be sacked for no valid reason if they support the union.

Deva is also ignoring the voice of public opinion, particularly of the Association of Doctors and Association of Pharmacists who have already publicly announced that Deva workers should be able to exercise their fundamental rights without any pressure and intimidation.

Raina added in the letter to Deva:

“I need to reiterate that this level of continued and blatant illegal union busting will label your company and its products as unethical in the extreme. We will be making this known widely until you recognize Petrol-Is as the union that your employees have chosen to organize into.

Collective bargaining must now begin as instructed by the Labour Ministry, and the 27 employees that your company has sacked for supporting Petrol-Is must be reinstated.”

Nov 6, 2014 – Click here and watch this IndustriALL video about the violations committed in India by the world’s largest cement producer, Holcim.

See the background here to read about a history of exploitation, contract workers killed at work, trade unionists jailed by sham criminal charges filed by Holcim security officers, poverty wages, exploitation of local communities, and the company ignoring the union.

Oct 31, 2014 – IndustriALL Global Union is calling on Rio Tinto to speak publicly about what it will do to end the string of deaths at the Grasberg mine in Indonesia. The mine is now facing a strike over safety concerns.

IndustriALL’s Indonesian affiliate CEMWU has announced it will begin a one-month strike at the mine on 6 November due to mine management not being held responsible for the fatalities. Five miners died at the copper and gold mine in September. This brings the total number of workers killed at the mine over the last two years to a staggering 38.

Rio Tinto has invested over a billion dollars in the Grasberg mine and serves on its operating, technical and sustainable development committees. The mine is majority-owned by Freeport.

“Rio Tinto made no public statement following two recent fatal incidents at Grasberg. This is unacceptable for a company that says safety of its workers is core to everything it does,” says IndustriALL Assistant General Secretary Kemal Özkan.

“It appears the company’s public silence is part of an attempt to keep its name out of press reports on the fatalities. But it’s time for Rio Tinto to own up to its failure and speak openly about what the company will do to ensure these disasters never happen again.”

IndustriALL has raised workplace safety concerns with Rio Tinto on a number of times since a tunnel collapse killed 28 workers at Grasberg in May 2013.

“Rio Tinto has claimed to us in private that Freeport, not Rio Tinto, manages Grasberg, but that they are now helping Freeport to improve safety performance. However, given Rio Tinto’s huge stake in the mine it’s simply not credible to deny any responsibility for the deaths,” states Özkan.

“And why should we believe Rio Tinto will all of a sudden help make the mine safe, given they’ve invested in the mine for nearly 20 years? It’s no wonder that Rio Tinto has avoided public discussion of worker deaths at Grasberg.”

IndustriALL is not the first organization to hold Rio Tinto accountable for irresponsible practices at Grasberg. Norway’s state-owned pension fund sold its entire $850 million stake in Rio Tinto in 2008 because Grasberg discharges huge amounts of tailings directly into a natural river system. In 2006 the fund sold its stake in Freeport for the same reason.

“With bodies piling up and a strike imminent, Rio Tinto needs to stop hiding behind Freeport and take a more active and public role in making Grasberg a safe place to work.”

Nov 4, 2014 – Since the Arab Spring in 2010, trade unions in Tunisia have worked with the government and political parties to maintain stabililty and to avoid the violence experienced in neighboring countries. Yet unions have not played a strong role in policy-making, labour legislation is not enforced and it does not serve the workers’ interests.

Unionisation is growing in Tunisia, but there are still many rights violations in the private sector. The unions have been continuously engaging with government and the political parties but there is no clear sustainable industrial policy. Many multinational companies (MNC) are present in Tunisia and employment is the primary concern.

In Morocco, there is employment in factories connected to MNCs, particularly in the garment and electronics industries, but working conditions are poor and there is not strong government control over conditions. Most companies breach environmental legislation.

Participants agreed that unions need to engage with governments and employers to have more control over the development of the industries where their members work. Unions from France and Germany gave examples of how they have been able to work with their members on these issues. Campaigning starts with training members on the issues, developing union policy positions and proposals through discussion and mobilizing support for the proposals. Working at local level to save threatened plants through mobilizing members, working with the local community and making alternative proposals has been particularly successful.

In Germany, several offshore wind companies have relocated to Bremerhaven where shipbuilding collapsed, taking with it several thousand skilled jobs. Now employment is increasing to service the developing industry. In France, a new owner took over a Marseille shipyard after a strike lasting more than 500 days. The workers had argued that the business was viable and should not shut down and now the order book is full for 3 years. Further examples of union action include German union cooperation with chemical industry employers that is delivering reduced energy consumption while increasing production and a mass mobilization of 20,000 workers in Paris that achieved a national tripartite body dealing with the future of industry.

Participants concluded that unions have the right to be part of the decision-making for the industries their members work in. There is an urgent need for unions to build their capacity to be able to engage with governments and employers to influence the future direction of industry. This will require unions to develop their own perspective and proposals and involving their members. Unions will need to engage politically to achieve their aims and working with civil society is essential.

A key demand from the unions is for tripartite sectoral social dialogue that will enable their members to help shape the future direction of their industries.