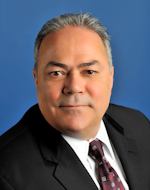 Pantoja initiated into IAM Local 1056 in Jamaica, NY in 1977 as an Aircraft Powerplant Mechanic for TWA. He served as a Shop Steward for Local 1056 until he transferred to Local 949 in St. Louis in 1988. At Local 949, Pantoja served as a Trustee, Recording Secretary and, in 1991, he was elected as the Chairman of the local’s full-time Grievance Committee. In 1996, Pantoja was assigned by IAM Air Transport District 142 to participate in the TWA Flight 800 accident investigation following the 747’s crash off the coast of Long Island.

Also in 2012, Pantoja was elected to serve on the Executive Board of the International Transport Workers’ Federation (ITF), headquartered in London. Pantoja has also served as Chairman of the ITF’s Civil Aviation Section Committee since 2010. The ITF is a global federation of transportation unions representing millions of transportation workers around the world.

In 2014, General Vice President Pantoja was appointed to the IAM National Pension Fund’s (IAMNPF) Board of Trustees. The IAMNPF is one of the largest and well-funded multi-employer pension funds in the United States.