February 2006 Sisters of the Month

When thinking about getting involved with the union, Noreen advises others, “do your best… put interest of the group ahead of personal interest.  Don’t promise results you can’t produce, only promise to try your best, listen to what people have to say and get back to them as soon as possible.” 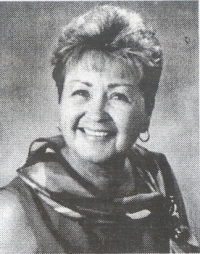 Sister Stormy is the Secretary-Treasurer and an Organizer from IAM District Lodge 776 in Texas.  She has been an IAM member for 28 years, with 11 years serving on Executive Boards for either her local or district.

An employee of Lockheed Martin, Stormy credits the encouragement of former business reps as the reason for getting more involved.  Once becoming more active in her union, she was encouraged to run for the Secretary-Treasurer position for Local Lodge 776A.  Experience and training from the Winpisinger Center inspired Stormy to eventually seek and win the Secretary-Treasurer position for District Lodge 776.

A deep belief in union principles and a sense of duty to help her sisters and brothers has driven Stormy’s union involvement.  She advises anyone seeking a leadership position within the union to begin by attending meetings regularly and volunteering where the help is needed – committees, election campaigns, phone banking, etc, and adds, “your sisters and brothers will respect and depend upon you when they see you’re always working to make things better.”

Stormy says when she first got involved having patience was her biggest asset to overcoming obstacles she encountered along the way.  In addition, she has rounded out her training by attending many classes at the Winpisinger Center.  She was honored to serve as a Sergeant-at-Arms for a Grand Lodge Convention and proud to speak in favor the CA System, a centralized accounting system currently being implemented in IAM local and district lodges.

In her spare time, she enjoys traveling for vacation, working in her garden and gathering with family and friends