Hitting the Street for Working People in Missouri 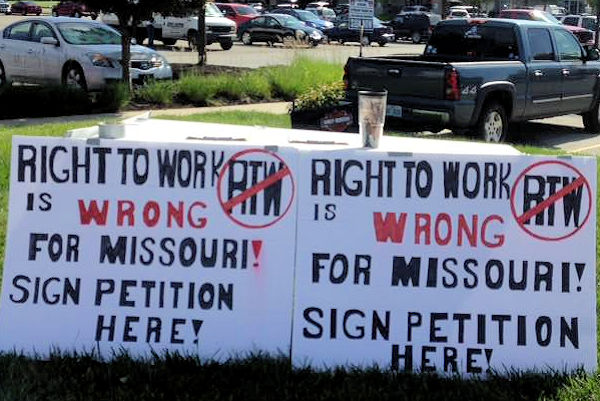 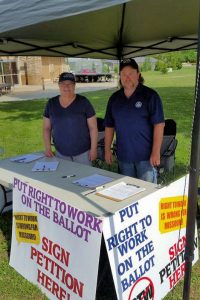 Kelly Street, TCU/IAM Local 6762 Recording Secretary, along with Jane Hull collecting signatures to put a referendum on the ballot to try and overturn “right-to-work” in Missouri. Jane is the wife of retired carpenter union member, Dennis Hull, who sets up regularly with Street collecting signatures.

When the man who drove by minutes earlier – displaying his middle finger out the window – pulled into the grocery store parking lot, Kelly Street prepared himself for what could be his first fist fight in close to two decades.

The middle-finger-waving-gentlemen carried a sign as he stormed past the makeshift petition signing spot. Street was at a grocery store collecting signatures in an effort to repeal Missouri’s right-to-work law set to go into effect this year.

The man stood in front of Street for a few minutes, then turned around to show him the derogatory statement on the sign.

“All the guy read from our sign was ‘right-to-work,’ so he wanted show his displeasure for the anti-worker law,” said Street. “After some brief discussion, he realized we were on the same side.

“He ended up being a really nice, pro-union guy. He left and brought me back some refreshments and even brought some buddies by to sign the petition.” 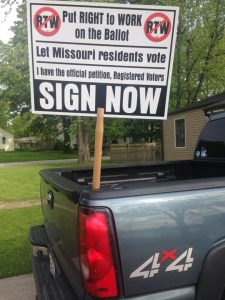 TCU/IAM Local 6762 Recording Secretary Kelly Street displays this sign from the back of his truck everywhere he goes in an attempt to gather as many signatures as he can.

That’s just one of the many interesting encounters the IAM/TCU Local 6762 Recording Secretary has been a part of since the campaign began in May. It also shows the confusion many people have surrounding the name and the issue of “right-to-work” laws.

As Cass County Coordinator, Street is volunteering over 20 hours every week educating voters. He’s gathered over 600 signatures, turning them in and training others on how to do the same.

Street has put over 3,000 miles on his truck driving to small towns in Missouri’s 4th Congressional District, setting up his table and signs in any parking lot he can.

“I have been working hard to get out to the rural areas,” said Street. “There are always petitions at large events and in the city, but we have a lot of union families and supporters out in the country that need educated on right-to-work and how it will have a negative impact on all of us.”

The anti-union law was one of the first bills Missouri Gov. Eric Greitens signed into law after taking office. Immediately after, a referendum petition was filed to freeze the law and put it on the ballot in 2018.

In addition to Street, IAM members all across Missouri have been working hard to get signatures. IAM Districts 9 and 837 in St. Louis and Local 778 in Kansas City have been holding weekly petition drives as well.

Opponents of “right-to-work” have until August 28 to collect signatures from at least 5 percent of voters from two-thirds of the state’s congressional districts – nearly 160,000 signatures – to put the referendum on the ballot.

“One thing Gov. Greitens and his cronies have done is solidified the labor movement in the state of Missouri,” said Street. “Regardless of the outcome, this has definitely brought us all closer together.”