Right-to-Work Passes in Missouri, But Working People Look to Counterpunch 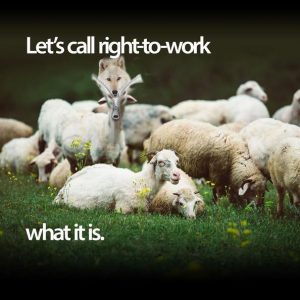 The ink was barely dry on Missouri’s new “right-to-work” law when working people struck back by filing a referendum petition to freeze the law and put it on the ballot in 2018. The law forces unions to give a “free ride” by allowing people to opt out of paying union dues while still receiving representation and all the benefits of a union contract.

Sign up for updates on how to support Missouri workers.

Organizers for the referendum petition have until August 28, – the day the law is scheduled to go in effect – to gather roughly 90,000 signatures, 5 percent of voters from two-thirds of Missouri’s congressional districts.

As more states become “right-to-work,” there is a push from anti-union politicians in Washington, DC to propose a national form of the legislation.

Sign up to for updates on how to support Missouri workers.