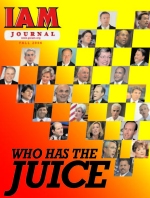 With less than a month before Election Day, voters in thirty-six states are poised to choose governors with the power to create jobs, control gas prices, expand (or restrict) collective bargaining rights and bypass the gridlock that routinely stymies lawmakers in Washington, D.C.

“The consequences for union members are enormous,” said IP Tom Buffenbarger in the feature article in the latest issue of the IAM Journal. “From controlling utility rates to raising the minimum wage and preserving jobs, governors have the power to make things happen as soon as they take office.”

The Journal article examines governors’ races in Wisconsin, Pennsylvania, Michigan, Ohio, Kansas, Illinois and California, where stark contrasts on economic issues define Republican and Democratic candidates. “These five states, with more than 200,000 IAM members, could also determine the outcome of elections in 2008,” said Buffenbarger, who noted the impact governors in Florida and Ohio had on past presidential elections.

While voters may have strong opinions on the latest scandal or national security, it is more often basic pocketbook politics that determines who gets their vote. In a recent IAM survey, likely voters overwhelmingly identified economic issues as what matters most to them. “While the national media is hyperventilating over Senate and House Races, the contests with the potential to affect issues that matter most to voters are governors’ races,” said Vic Fingerhut, who conducted the IAM poll.

Visit www.goiam.org to take part in a unique IAM campaign designed to give governors’ races in 36 states the attention they deserve.