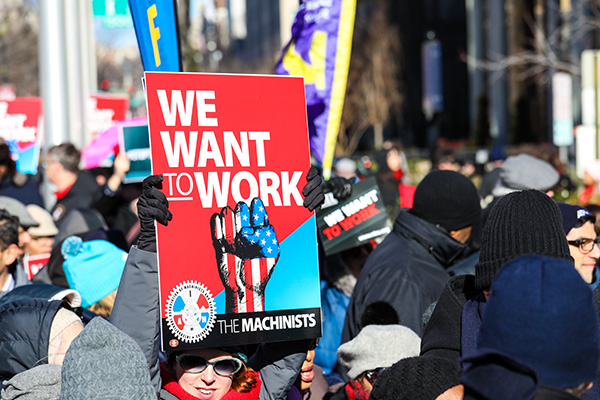 “Congress must go further and pass a bill to guarantee back pay for federal contract workers who have been furloughed or forced to work without pay,” said Martinez. “The Machinists Union has taken the first step to make this a reality. We are working with members of Congress to introduce legislation that will provide back pay to all federal contractors affected by this manufactured shut down.”

The IAM and other unions that represent federal workers and contractors have demanded justice for employees who are being held hostage since the political showdown began. Just today Martinez was included in a NBC News article on the plight of federal contractors.

READ: Shutdown pain for federal contractors gets more dire by the day

“The impact of this needless government shutdown on federal contract workers has been crippling,” said Martinez. “These families are facing layoffs and missing payments for their mortgages, student loans, school tuition, car loans, health care premiums, daycare and so many other expenses. At the same time, critical government services have been affected. Our veterans, senior citizens, the disabled and our children are also suffering because the federal services they depend on have stopped or slowed due to the shutdown.”

On January 26, Florida IAM District 166 will hold a solidarity rally and food drive to support members in Cape Canaveral, FL who work at Kennedy Space Center affected by the shutdown.

The IAM has been part of rallies and civil actions in Washington, D.C. and around the country to denounce the shutdown and call for its end. Thousands participated in a march from the AFL-CIO headquarters to the White House. A rally at Nationals Park shamed republican lawmakers attending a “retreat” at the venue.