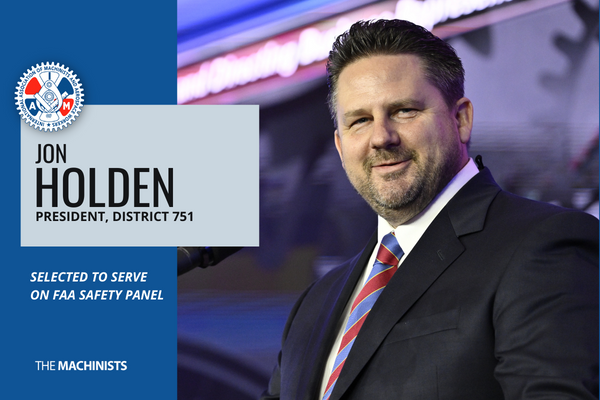 The appointment comes days after Congress recently reached an agreement on an end-of-year government spending bill that included an amendment granting Boeing a modification to the certification deadline, which would allow the 737 MAX 7 and MAX 10 jets to complete aircraft certification without significant disruptions. The amendment, which includes several mandatory safety enhancements, protects thousands of Machinists’ jobs by ensuring a deadline included in legislation passed in 2020 does not apply to the MAX 7 and MAX 10 models that have yet entered service.

Holden was hired at the Boeing Co., starting his career at the Everett, Washington plant in 1997. Since 2014, Holden has served as the president and directing business representative of IAM District 751, which represents about 32,000 aerospace workers at Boeing and other suppliers, as well as other manufacturing industries.

“It’s an honor to represent our members’ voice on the future and culture of Boeing,” said Holden. “Our members are on the frontlines daily and understand the processes needed to ensure the customer’s safety and well-being. This panel is a step in the right direction and allows us to strengthen our presence in the aerospace industry.”

The panel is tasked with reviewing Boeing Co.’s safety management processes and will have nine months to complete the review and issue findings and recommendations.