The Case For Arbitration In Labor Law Reform 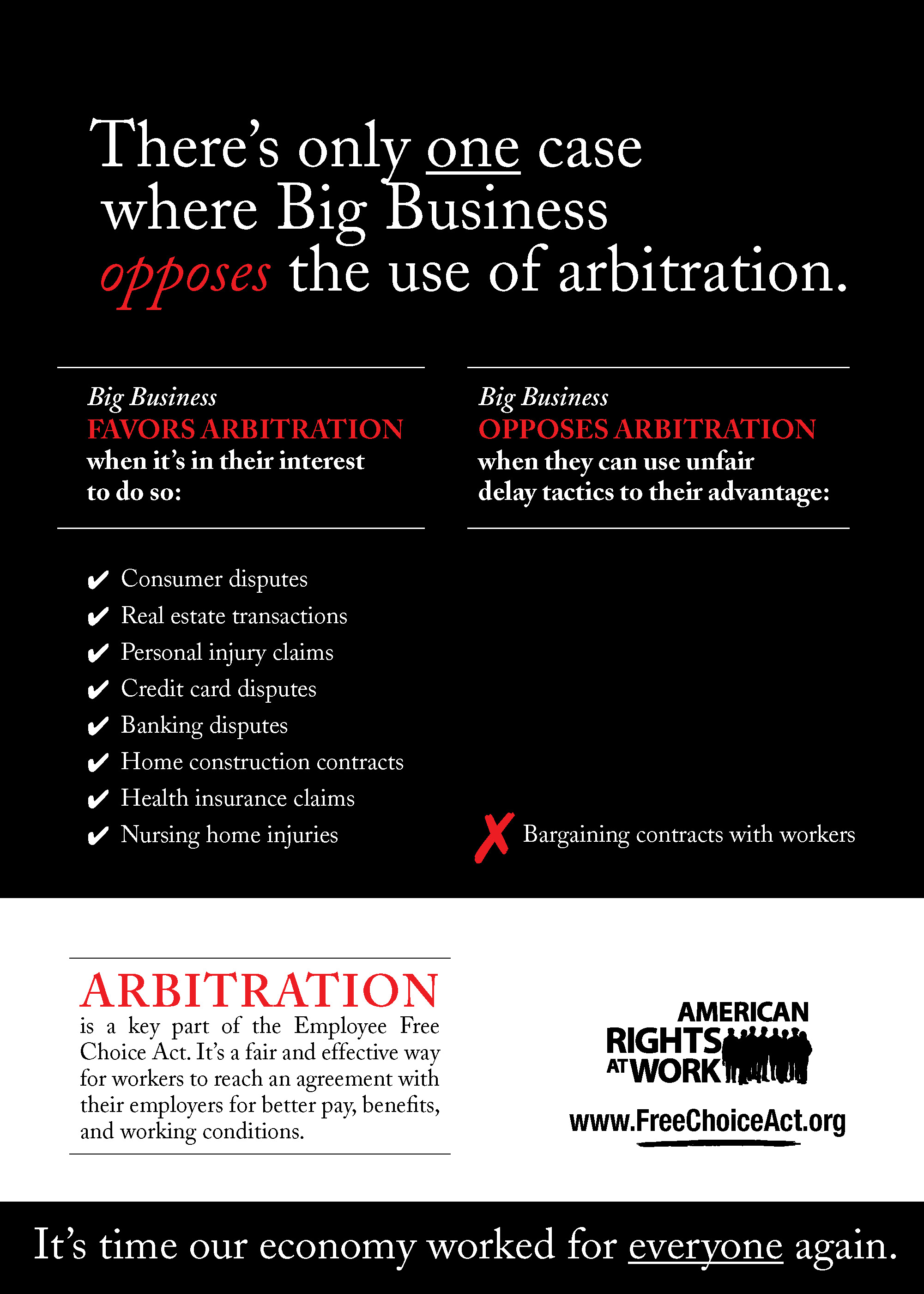 Arbitration is a key part of the Employee Free Choice Act.  It’s a fair and effective way for workers to reach an agreement with their employers for better pay, benefits, and working conditions.

Labor law reform must ensure that workers who want to join a union are able to do so without facing endless delays from corporations seeking to deny them a voice in the workplace. Companies currently use stall tactics to prevent workers from getting a contract. In fact, one year after a successful union election, 52 percent of workers’ unions still did not have a contract. Arbitration will give companies an incentive to negotiate in good faith and ensure that workers who have chosen to join a union actually get a contract. Even big business has agreed that arbitration is an efficient way to settle disputes. Clearly, their position is hypocritical and motivated by their desire to maintain the current system in which corporations make millions while middle class families struggle. Download the ad here.

Talking Point: Labor law reform must ensure that workers who want to join a union are able to do so without facing endless delays and stalling tactics from companies seeking to deny them a voice in the workplace.

FACT – One Year After A Successful Union Election, Fifty-Two Percent Of Workers Still Do Not Have A Contract. According to Cornell University researcher Kate Bronfenbrenner, 52 percent of workers’ unions had no collective bargaining agreement one year after a successful election. Two years after an election, 37 percent of workers’ unions still had no labor agreement. [Kate Bronfenbrenner, “No Holds Barred: The Intensification of Employer Opposition to Organizing,” May 2009]

Arbitration Will Help Ensure That A Contract Is Reached

Talking Point: The Employee Free Choice Act would give both workers and companies the right to request mediation from an outside source if they cannot reach a contract. This will help end the stalls and delays that workers currently face and ensure negotiations are conducted in good faith.

FACT – Arbitration Works To Encourage Voluntary Settlement Of Contract Negotiations: Experience in the public sector shows that only a small minority, in most cases well under 10 percent, of negotiations end up requiring an arbitration decision In half of the states and the District of Columbia, public sector employees have the right to resolve collective bargaining conflicts through arbitration, and yet the vast majority of these contracts are still settled voluntarily rather than through arbitration. [American Rights at Work, “Low Rates of Arbitration Use in the Public Sector,” 2009]

Talking Point: Businesses are opposed to arbitration provisions and the Employee Free Choice Act overall because they want to maintain the status quo in which CEOs made millions while workers struggled to pay their mortgages and find affordable health care for their families.

FACT – Top Opponent Of Labor Law Reform Admitted CEOs Do Not Want To Give Up Control. Former Wal-Mart CEO Lee Scott said of the Employee Free Choice Act, “We like driving the car and we’re not going to give the steering wheel to anybody but us.” [WSJ Opinion, 11/18/08]

Talking Point: Big business is hypocritical in its opposition to arbitration, a tool that companies routinely use to resolve disputes with consumers and workers.

FACT – Business Praises Arbitration As Efficient And Effective. In May 2008, more than a dozen business trade groups wrote a letter to Congress stating, “Arbitration is an efficient, effective, and less expensive means of resolving disputes for consumers, employers, investors, employees and franchisees, in addition to the many businesses that use the same system to resolve business disputes.” The Washington Post reported in 2006, “Over the past decade, the arbitration clause has become increasingly common in almost every consumer contract, whether it’s for a credit card, telephone service, pesticide treatment or home construction…” [NY Times, 10/6/08; Washington Post, 4/17/06]