September 26, 2006 – In a day-long vote, locked out members of AEIF-IAM Local 1943 in Middletown, OH voted to reject vaguely worded outsourcing and back-to-work terms contained in a “final offer” from AK Steel Corp.

The company presented the 2-inch thick document three days earlier, angering the locked out workforce by setting a deadline of midnight Monday for a decision.

While the proposal included the IAM National Pension Plan, a key issue for members, the company would have “the absolute right, in its sole discretion, and without any bargaining requirement, to withdraw from the Machinists plan at any time in the first five years,” and substitute a 401K plan.

Members also objected to the company’s proposed back-to-work terms calling for a 6-month period in which the membership would be required to work with replacement workers currently operating the facility.

Yesterday, Friday September 22, 2006, AK Steel presented us with a “Final Company Proposal.” We were told that the proposal would expire at midnight this Monday, September 25, 2006 “unless accepted.” This afternoon, the Company clarified that “accepted” means “ratified.” While your Executive Committee DOES NOT ENDORSE the “Final Company Proposal,” we have been advised that IAM rules require us to submit a final offer to our membership for a ratification vote.

Obviously, we have been provided little time to prepare informational packets and schedule informational meetings and a ratification vote. This is why you are receiving such short notice.

Nonetheless, copies of the “Final Company Proposal” and a summary are now being prepared and will be available at the Union Hall as soon as possible.

AK Steel Corp. and its union will return to the bargaining table Sept. 12, the company said Tuesday.

AK Steel and representatives with the International Machinists Association 1943 met Friday for an hour and a half during which the union gave the company another contract proposal.

The company locked out about 2,500 workers Feb. 28 when their labor contract expired without a new deal in place.

For the first time in 63 years, the union negotiating Thursday with AK Steel Corp. was augmented by an international union, which on Thursday announced it would offer financial help to its members.

Of the 2,207 eligible voters in the AEIF bargaining unit, 1,056 voted in favor of IAM representation. The USW received 790 votes and 10 ballots were cast to keep the AEIF as representative. No votes were for “No Union” and the NLRB declared one ballot void.

“AEIF leaders contacted the IAM earlier this year seeking help to end the 5-month long lockout at AK Steel Corp. and to explore the possibility of affiliating with the Machinists union,” said IP Tom Buffenbarger. “Today’s victory gives each and every AEIF member a seat of honor inside the IAM, and an opportunity for a secure pension with the IAM National Pension Fund (NPF).”

AEIF members were locked out by AK Steel on Feb. 28 in a dispute over health care costs, work rules and finding a replacement for the company-managed pension plan. IAM membership allows negotiators to propose a defined benefit pension under the IAM’s highly regarded multi-employer plan. AK Steel proposed to replace the current pension with a risk-based 401k plan.

“AEIF has a proud 63-year history representing generations of workers here in Middletown,” said AEIF President Brian Daley. “Partnering with the IAM gives us the opportunity to preserve our traditions and to negotiate a pension plan that is worthy of the men and women in this community.”

“The IAM pledged to conduct a positive campaign and we delivered on that promise,” said IAM Eastern Territory Vice President Lynn Tucker, Jr. “Despite efforts by the company to delay the election process, we look forward to quickly resolving the lockout and the issues that led to it.”

Lost sales, late deliveries, concerns about the quality of the steel being produced by replacement workers all add up to costs that are not fully reflected in the company’s second quarter report.

“This lockout should have been settled weeks ago,” declared Brian Daley, president of Armco Employees Independent Federation (AEIF), the independent union representing 2,700 workers at AK Steel. “The company is unnecessarily prolonging the dispute and I believe shareholders deserve an explanation.”

Daley will take part in a conference call with business analysts and media representatives today to provide the union’s perspective on the company, the union, status of negotiations and the upcoming NLRB union election.

“The employees and shareholders at AK Steel have a common interest in the long-term success of this company,” said Daley. “It’s bad business for management to let this dispute go on one day longer than necessary.”

July 23, 2006 – A pig roast hosted by the IAM for members of the Armco Employees Independent Federation in Middletown, Ohio was a family event and time for members of both unions to become aquainted. IAM members employed in the region attended to extend a welcome to their brothers and sisters of the AEIF.

Brian Daley, AEIF president said with the AEIF’s executive board endorsing the IAM as its new union representative, the momentum is there. “I can see the members are solidly behind the Machinists,” he said. “We understand that some of our members are in need of financial assistance and believe the route to go is with the Machinists.”

He is concerned about the future of AEIF members if they vote to join the USW. It would “be the worst choice ever made by our rank and file.

R. Thomas Buffenbarger, IAM president who is originally from Lebanon, attended Friday’s picnic and walked the picket lines during the day.

“The people I met today humbled me,” said Buffenbarger. “I’ve come away with a good feeling that these folks are dedicated to the cause. I hope to link our brothers and sisters to achieve a good contract and a good contract that these members deserve When you stand up for what’s right, there’s something good at the end of the struggle.”

Photo gallery of the picnic here

Acting more than two months before AK Steel Corp. planned to increase health care costs for some retirees, a group filed a lawsuit Tuesday against the Middletown steelmaker in federal court.

But it’s a case of dueling federal lawsuits: When AK announced last month that it would revise some retiree health insurance benefits, it filed its own suit seeking declaratory judgment that its plans were lawful, an AK spokesman said.

Nine retirees are named as plaintiffs in the complaint filed Tuesday. But attorney David Cook said 4,285 retired hourly workers and 125 salaried workers are “putative class members” or situated similarly to the named plaintiffs.

Cook pledged to seek class-action status for the suit. And he wants a preliminary injunction to block AK’s plans. 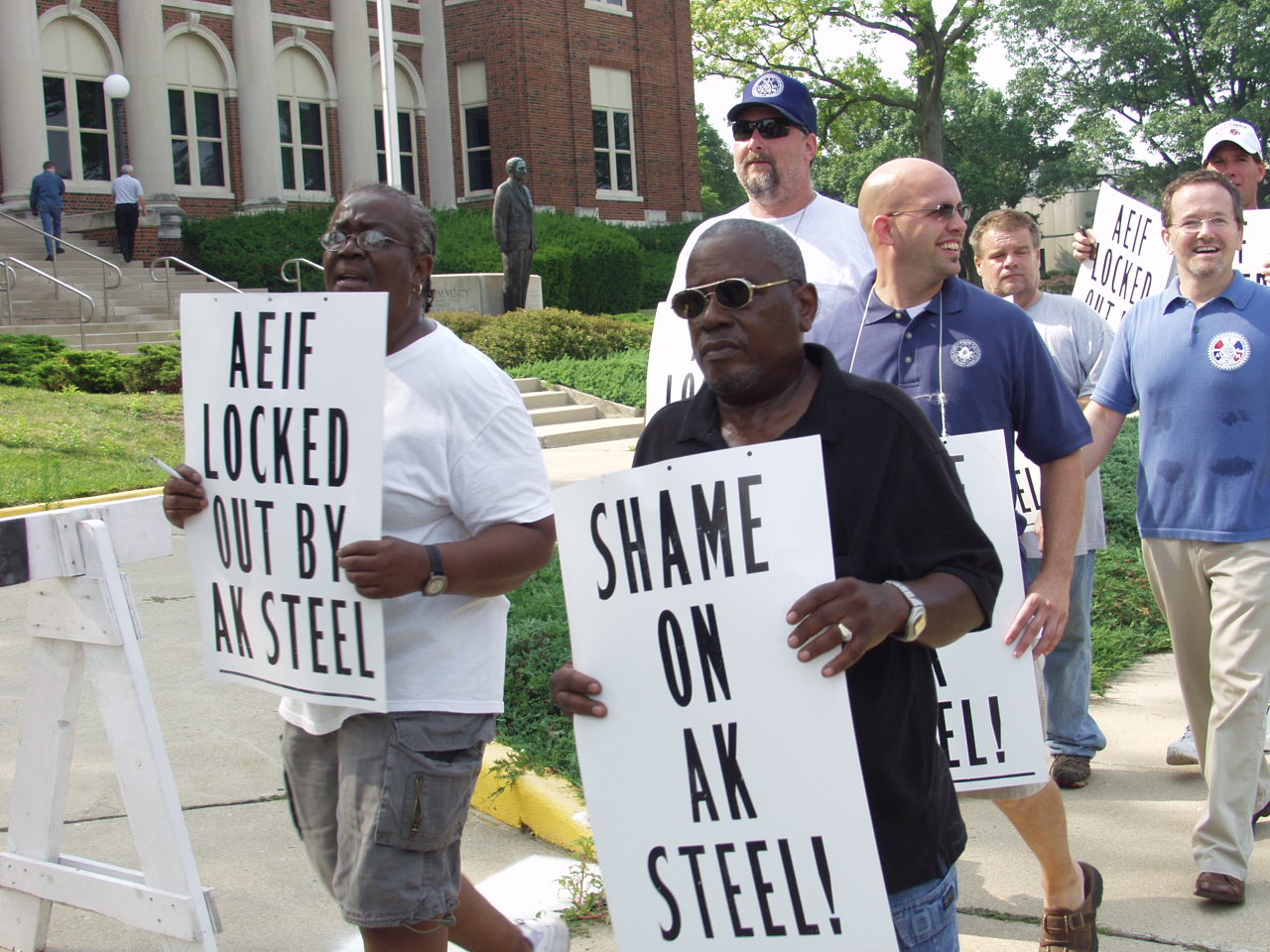 Marching in the shadow of a giant rat, more than 100 locked-out workers delivered an unmistakable message of unity and defiance to managers inside AK Steel Corp. headquarters in Middletown OH.

Triggering nearby car alarms with their chanting and backing down company security guards when they approached union members, the marchers made their case: “We want this lockout to end, we want a secure pension and we want to get back to making steel,” declared Brian Daley, president of the Armco Employees Independent Federation (AEIF), the independent union representing 2,200 locked out workers at the mill.

The nearly five-month long lockout led AEIF leaders in May to propose joining with the IAM in a move that would give members access to the IAM National Pension Fund. Finding a replacement for AK Steel’s under-funded pension plan was a key issue for AEIF members and officers. 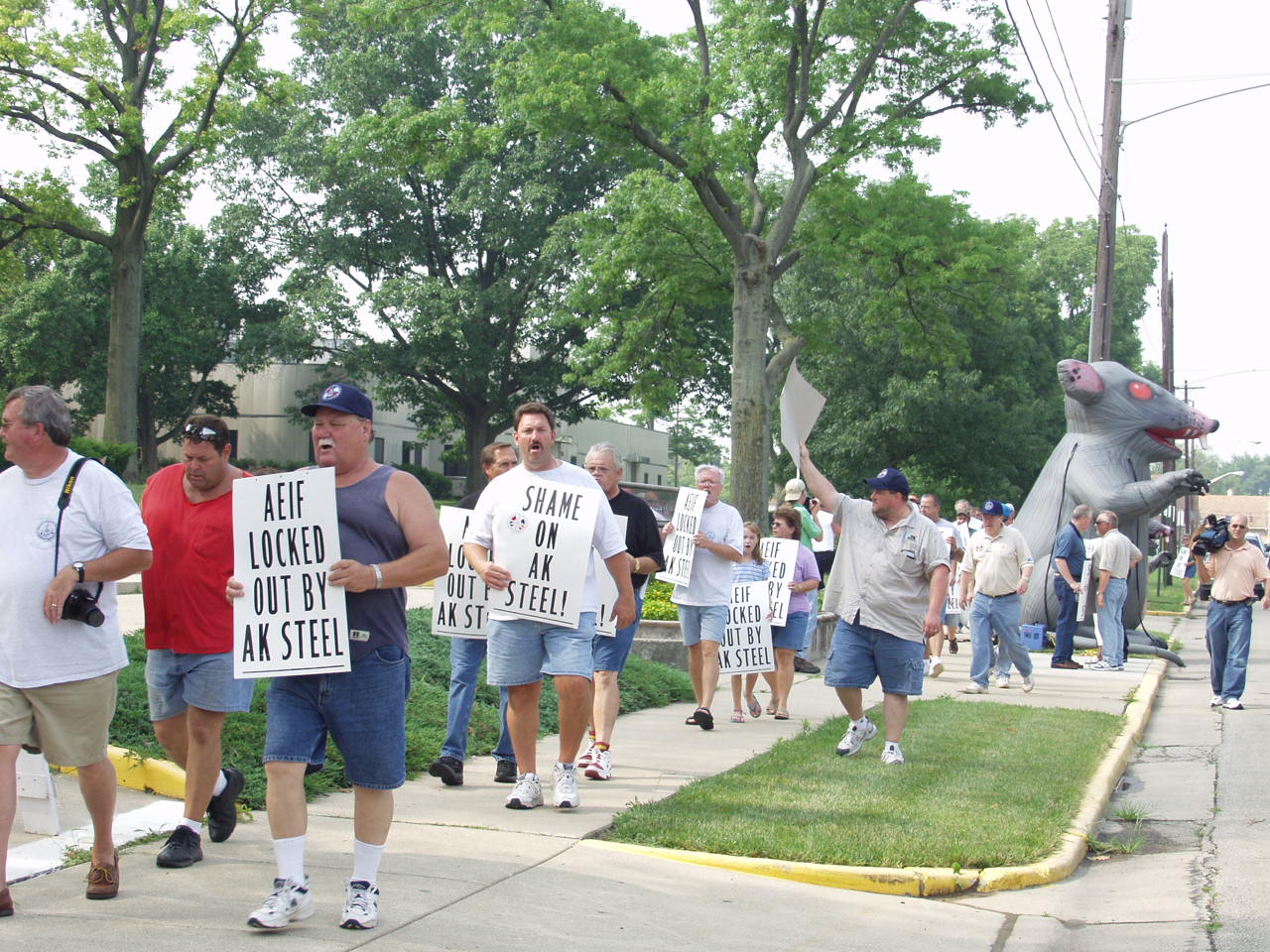 For nearly five months, more than 2,000 AEIF members have been locked out of AK’s Middletown Works.

Those who took to Curtis Street Friday had apparently had enough.

At one point, two security employees left AK’s front lobby to approach Brian Daley, AEIF president, stopping about 10 feet away from him. This seemed only to agitate the crowd all the more.

Representatives of AK and the AEIF last met Monday. The next meeting has not been scheduled yet, Daley said Friday morning. AK says it needs a contract that puts Middletown Works in a competitive position in the global steel industry, while the union says it needs to protect jobs and members’ living standard.

Photo Gallery Of The Picket Here.

July 12, 2006 – The National Labor Relations Board (NLRB) will conduct a representational election in Middletown, OH on July 26-27 for 2,700 locked out members of the Armco Employees Independent Federation (AEIF).

The election will provide members of the 63-year old independent union with an opportunity to join the IAM and negotiate participation in the IAM National Pension Plan. Leaders of the AEIF encouraged members to sign authorization cards for the IAM and more than 60 percent did so.

A board official said the NLRB traditionally supports manual, walk-in elections because they are more easily initiated and provide more control over the proceedings. Results of a walk-in election are also available faster than an election using mail ballots.

Management at AK Steel urged the NLRB to hold a more prolonged mail ballot election, despite claims that it had no interest in who represented the workers at AK Steel.

Transition Agreement between the AEIF and IAM.

July 7, 2006 – In a brief filed July 6, 2006, AK Steel officials continued to drag out the process in which AEIF members currently locked out by the steel company and seeking representation from the IAM.

In the brief, delivered to the National Labor Relations Board (NLRB) Regional Director, AK Steel states that the decision by the Board on how the election process is to be conducted “under these circumstances will be nothing short of a travesty.”

Read the entire report and the brief filed by AK Steel here.

Be On the Lookout for AK ‘Scab Steel’

More than 2,700 AEIF workers have been locked out of their jobs by AK Steel in Middletown, OH since February, 2006.

“Our understanding is that AK Steel has used up its inventory and is now shipping ‘scab steel’ made by managers and scabs who are trying to keep the mill operating,” said Eastern Territory  GVP Lynn Tucker, Jr. “We can help the AEIF by being on the lookout for shipments of AK scab steel used to make appliances, auto parts or other products in bargaining units where employers use AK Steel.”

Please leave a message at 1-888-369-7441 if you suspect shipments of AK scab steel are being used in your location and if the quality of the steel has started to go down.

Go to www.aeif-iam.org for additional information about the AEIF campaign to win IAM representation, a new contract and a secure pension for workers at AK Steel.

As the lockout between AK Steel Corp. and the Armco Employees Independent Federation enters its fifth month, the independent union is clamoring for solidarity to see its way through the labor dispute.

The AEIF brass have strongly supported the Machinists, as have a majority of its members.

“It’s division by design,” said AEIF President Brian Daley of the USW’s most recent attempt to intervene. “And it’s something that’s not appreciated.

“When people are making efforts to be divisive, yes, that’s one of the reasons why we have asked the Steelworkers to not come in and raid our union,” Daley said. Read the Middletown Journal report here.

Members of Armco Employees Independent Federation will have an opportunity to determine their fate in an election that is expected to be held this month, according to a ruling of the National Labor Relations Board.

Among the details released in the NLRB’s decision late Friday are specific ballot language that will be used in the election slated for July 25-28, and eligibility requirements of potential voters. Read the Middletown Journal report here.