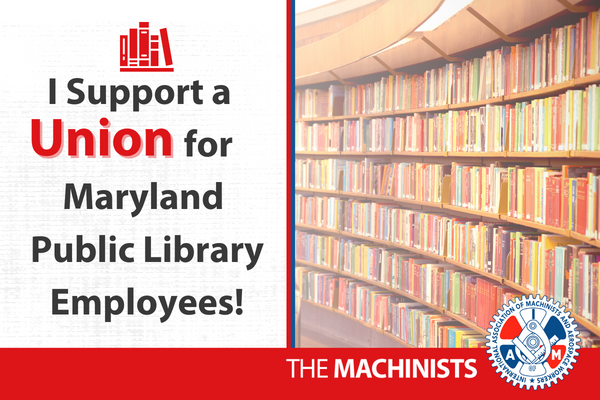 The IAM is supporting legislation sponsored by Maryland State Del. Steve Johnson (D-34A), which would provide a consistent process for employees of unorganized public library systems in Maryland to form a union and collectively bargain. Senator Nancy King (D-39) is cross-filing the legislation in the Senate.

“All of our state’s hard-working library workers deserve a voice in the workplace,” Sen. King said. “These public servants are so important to their communities, and they deserve a process to collectively bargain if they wish to do so.”

This legislation, House Bill (H.B.) 65, does not guarantee union organizing or require library system employees to form a union. H.B. 65 enables Maryland library workers to organize for union representation, should they wish to do so.

“This is a constitutional bill,” Del. Johnson said. “This important piece of legislation gives our state’s unorganized public library workers a clear and consistent pathway to use their constitutional right to join a labor union if they wish.”

The plight of BCPL workers seeking a pathway to organize also gained the attention of President Joe Biden, who invited a BCPL member to speak before the White House Task Force on Worker Organizing and Empowerment.

“Library workers in every county of Maryland should have the same ability to join a union if they choose,” said IAM International President Robert Martinez, Jr. in a letter to members of the Maryland Assembly. “Library workers’ ability to exercise their right to join a union in the state of Maryland should not be based on the county system in which they work, but instead on the universally-recognized right to freedom of association. This freedom should be available to any library worker who wishes to seek the option.”