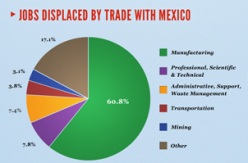 A new IAM infographic details NAFTA’s failed trade policies. The 1994 law is the blueprint for the three pending free trade agreements (FTAs) – despite the economic havoc it’s wreaked over the last 17 years.

The Economic Policy Institute estimates NAFTA has displaced 682,900 U.S. workers since its inception, three-fifths of those displaced jobs (415,000) were in the manufacturing sector. Coupled with the Great Recession which began in December 2007, the end result has been a soaring unemployment rate, a hollowed-out manufacturing sector and the loss of the American dream for thousands of working families.

“Free-trade supporters promised fast growth and high-paying jobs – a win-win for everyone,” said Buffenbarger. “But, the only winners were the multinational corporations who negotiated the legislation in the first place. They made off with American jobs and middle-class wages, creating the worst polarization of wealth since the 1920s.”

Studies show NAFTA has done very little to boost economic growth in Mexico, as well. Seventeen years later, the country remains in poverty. Its economy grew only 1.6 percent per capita on average between 1992 and 2007, according to the New York Times.

“NAFTA created the trend of corporations shifting production to countries where wages are low, worker rights nearly nonexistent and little regard is given to the environment ,” said Buffenbarger. “Like their predecessor, the three pending FTAs with South Korea, Colombia and Panama threaten to create the same kind of damage – only more.”

“People say that’s a part of life,” said former Galesburg, IL, Mayor Robert Sheehan in 2002, as he watched Maytag, an American icon and his city’s only major employer, take away jobs and move to Reynosa, Mexico. “When it hits elsewhere, people can just shrug their shoulders and say life goes on. But when it hits your own area, well, then it has a very different meaning.”

Join the fight to stop the South Korea, Colombia and Panama FTAs by clicking the “like” button on the IAM Facebook page!