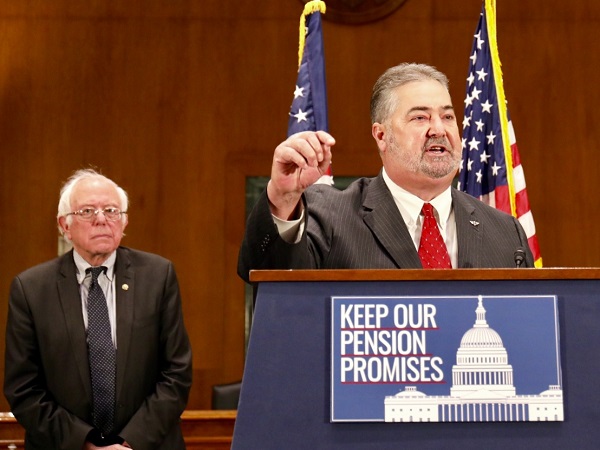 Martinez was joined by hundreds of Machinists Union members and other allies to promote the Keep Our Pension Promises Act, or KOPPA. The legislation would restore the long-standing rule prohibiting multi-employer pension plans from cutting benefits to current retirees.

“Too many Americans have already had their earned retirements ripped away from them through no fault of their own,” said Martinez. “Where I’m from in Texas, we call that highway robbery.”

Congress did away with what’s known as the “anti-cutback rule” in 2014. Until then, ERISA, or the Employee Retirement Income Security Act, protected retirees in so-called “troubled” multi-employer pension plans from cuts to their earned benefits.

The IAM was a leading opponent of gutting the anti-cutback rule.

KOPPA, which is being introduced by Sanders (I-VT) in the Senate and Rep. Marcy Kaptur (D-OH) in the House, would restore that protection. It would also adequately fund the Pension Benefit Guarantee Corporation, which steps in to pay retirees when pension plans become insolvent.

A comfortable retirement, or a retirement at all, is becoming out of reach for a troublingly large number of middle-class Americans, Sanders said.

“Retirees all over this country are waking up to the reality that the pension benefits they are receiving today may soon be cut by 20, 30, or even 65 percent,” said Sanders. “Imagine that. Imagine working your whole life and sacrificing to ensure that your family has a secure retirement and one day you wake up and find out there are plans to cut your retirement.”

Machinists Union members in Washington, DC for the IAM Legislative Conference packed the room, along with other pension advocates. IAM members are visiting members of Congress all week to promote KOPPA and other legislation that would help working families.

Restoring pension security should be a no-brainer for any member of Congress who claims to support the middle class, said Martinez. President Trump, who during his campaign promised to fight for working Americans, should demand KOPPA’s passage, said Martinez.

“If the President really supports working men and women, like he says he does, he should put KOPPA on the fast track to his desk to be signed into law,” said Martinez.

Call the Capitol switchboard at 202-224-3121 and tell your Senators and Representative to stand for retirement security by co-sponsoring the Keep Our Pension Promises Act.

Read Martinez’s letters in support of KOPPA to the House and Senate.

Write your own message of support using the hashtag #ProtectOurPensions, or share these tweets, to show you stand for retirement security:

We will not allow workers’ earned pension benefits to be cut. When the government makes promises they must be kept. https://t.co/PMm9cw1PlO

Workers & retirees from Wisconsin & across U.S. came together w/ @SenFranken, @SenSanders & I today to push for #PensionPromises to be kept. pic.twitter.com/siG5HAKJaA

If you care abt working men, women of this country, then you will want them to have secure retirements & that means honoring their pensions. pic.twitter.com/CoZbpydoaI