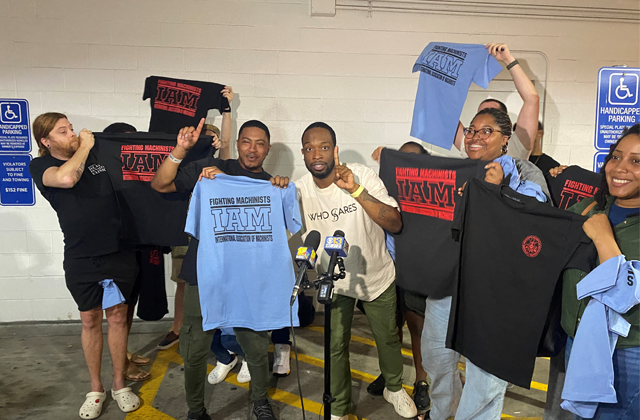 The National Labor Relations Board certified the union election win for over 100 Apple store employees in Towson, Md. The Coalition of Organized Retail Employees (CORE) overwhelmingly voted to join the International Association of Machinists and Aerospace Workers (IAM).

The group will be known as IAM-CORE. The official certification now allows IAM-CORE and Apple management to meet and negotiate a fair first contract.

READ: Apple ready to bargain with its first U.S. store to unionize Reuters

“The IAM and the new members of IAM-CORE in Towson, Md., look forward to bargaining with Apple and obtaining a strong first contract that makes positive changes for Apple workers and the customers they are proud to serve,” said IAM Eastern Territory General Vice President David Sullivan.  “IAM-CORE members feel that the opportunity to collectively bargain with Apple will enhance their workplace and continue to advance Apple’s standing as one of the world’s most innovative companies. IAM-CORE continues to organize from coast to coast to bring a greater voice on the job to Apple workers.”

The National Labor Relations Board vote count was announced on Saturday, June 18.

“We look forward to sitting down with Apple to help improve our workplace and enhance our customer service capabilities,” said IAM-CORE employees. “Our goal is to make Apple the number one company in the world and the number one workplace in the world. Together we can achieve greatness starting at the bargaining table.”

“We are ready to get our team working to secure the best contract for IAM-CORE members at the Apple store in Towson that will benefit Apple, its customers, and the community,” said IAM International President Robert Martinez Jr. “We expect Apple to bargain in good faith. The IAM’s experience at the negotiating table will create a blueprint for Apple store employees across our nation.”

The IAM has launched organizing campaigns in non-traditional industries to grow the strength of the IAM and working families over the past few years, including the Baltimore County Public Library System, the tech industry, healthcare, and veterinary medicine workers. This was an employee-driven campaign from the start and can take credit for Apple’s decision to raise the starting wages for every Apple retail employee across the nation.