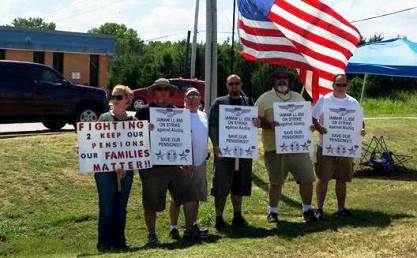 After nearly three months on strike over health care benefits and their pension, members of IAM Local 850 at Tinker AFB in Oklahoma are returning to work following the ratification of a new three-year deal with Alutiiq. Federal Mediators brought both sides together in late October, and after several long days of negotiations, members voted on November 20 to accept the proposal.

The contract provides two percent raises each year, and vastly improved health insurance. The IAM also negotiated an improved short-term disability plan, along with dental, vision, life and accidental death and dismemberment insurance, all of which will be 100 percent company paid.

The members fought hard to keep their pension plan, but the company’s final offer, which was ratified by the members, instead puts the money into the union’s 401(k) plan. The company will contribute $2.30 to $2.50 per hour over the life of the contract towards the IAM National 401(k) plan. Members were very happy to have contributions go into the IAM plan instead of the company having control over the money.

“The members of Local 850 want to thank IAM districts, locals and members across North America who gave tens of thousands of dollars to help the members stay out on strike,” said Southern Territory Special Representative Tony Wirth. “And the workers will have several weeks before they get a paycheck, so the IAM is still helping out. Everyone got a $50 grocery card for Thanksgiving, and the food bank has trimmings available to round out their meal. Districts and locals are banding together so that the families will not suffer for Christmas this year because of the strike. It’s been wonderful to see the outpouring of love and support from the IAM family.”

“Everyone held strong during this strike,” said Southern Territory General Vice President Mark Blondin. “They went out together, and stayed out together, and are now going in together standing strong and proud. They achieved far better medical benefits than initially offered. The significant per-hour contributions toward the IAM 401(k) plan gives each member approximately $5,000 per year. The members of Local 850 are far stronger and more together than the company ever anticipated. They showed everyone that a fight for health care and retirement benefits is a fight to take on. All of us in the Southern Territory appreciate the outpouring from across our union to support this local – it made the difference to everyone.”