HELHELLO AND WELCOME TO MACHINISTS ON THE HILL,
a twice-monthly roundup of legislative advocacy on behalf of IAM members.

IAM PUSHES FOR PAYCHECK GUARANTEE ACT: The IAM has voiced strong support for the Paycheck Guarantee Act, which was introduced by Rep. Pramila Jayapal (D-WA).

Owen Herrnstadt, IAM Chief of Staff to the International President, testified in support of the legislation during a virtual Congressional Progressive Caucus hearing Wednesday, April 29. The legislation includes provisions such as granting employers relief to pay for wages and healthcare benefits for their employers. That includes bringing previously displaced workers back onto their payroll and preventing employers from being forced to permanently close their doors.

“The Act is simple, effective and accessible to those who need it most—workers,” Herrnstadt said during the hearing. “If Congress can hand out a trillion dollar tax cut to corporations it should be able to fund this program, especially with the number of workers applying for unemployment compensation topping 30 million.”

“Machinists Union members and millions more workers across the nation who are currently laid off will be critical to restarting our economy when we are past this pandemic,” said IAM International President Robert Martinez Jr. “Unless we take bold action now to keep employees connected to employers, our economy will take years or more to get back on its feet. The IAM stands with Congresswoman Jayapal and will do everything it takes to pass the Paycheck Guarantee Act.”

– TAKE ACTION: Tell your member of Congress to co-sponsor the Paycheck Guarantee Act

– READ: IAM’s letter in support of the Paycheck Guarantee Act

WE NEED A NATIONAL MANUFACTURING STRATEGY: IAM International President Robert Martinez Jr., authored an op-ed about how COVID-19 has bolstered the need for a national manufacturing strategy.

“The COVID-19 pandemic has also exposed dangerous national security vulnerabilities in our major industries and supply chains,” wrote Martinez. “Domestic sourcing, capable of rectifying America’s dependence on foreign-sourced critical supplies and systems, should be one of our nation’s top priorities.”

LAWMAKERS URGE HELP FOR LABOR UNIONS: A total of 106 House members signed onto an April 28 letter urging the chamber’s leadership to consider additions to the CARES ACT Payroll Protection Program (PPP) lending program for small businesses impacted by COVID-19. This includes a provision giving access to federal funds for non-profit 501(c)(5) organizations such as labor unions.

“It is especially critical at this time that the organizations fighting for America’s workers have equal access to the recovery funds made possible by the CARES Act,” the lawmakers wrote. “While unions hit hard by the crisis were excluded, large corporations can benefit from exceptions in the CARES Act that allow them to receive forgivable PPP loans meant for small businesses.”

The #COVID19 pandemic has exposed dangerous national security vulnerabilities in our major industries and supply chains.

We must make domestic sourcing a top priority. https://t.co/UYxqzJ101t

QUOTABLE: “Mark my words — our country will face tough economic times in the months and years ahead. By promoting federal support that simultaneously supports America’s working families and domestic manufacturing, our country can emerge stronger than ever from this crisis,” wrote IAM International President Robert Martinez Jr. in an op-ed supporting a national manufacturing strategy.

IAM DENOUNCES DELTA AND JETBLUE WORKER PAY CUTS: The IAM is expressing sharp criticism of Delta Air Lines and JetBlue Airways for cutting the pay of thousands of workers after accepting millions in federal relief as part of the CARES Act.

“The payroll support component for air carriers in the CARES Act requires that taxpayer-funded grant dollars be used to maintain the pay and benefits of the dedicated JetBlue and Delta workers who have made your airlines successful and who are risking their lives every day by providing essential services to the American public,” said IAM District 141 and 142 Presidents Mike Klemm and Dave Supplee in a letter to the two airlines’ CEOs.

The IAM aggressively lobbied for the CARES Act to include provisions like $114 billion specifically for the transportation industry. For the airlines, the law mandated that grant funds be used exclusively for the continuation of payment of wages, salaries and benefits for workers.

That included prohibited airlines from cutting airline workers pay and benefits and from laying off workers until September 30, 2020.

TCU-IAM SEEKS RECALL OF FURLOUGHED WORKERS DENIED BY FRA: The Federal Railroad Administration (FRA) denied a Joint Labor request that would ensure furloughed rail workers are recalled into service before granting any safety waivers to rail carriers on the basis of staff shortages due to COVID-19.

The FRA’s response is a false claim that they do not have the authority to force the recall of furloughed workers. Elections matter and presidential appointments continue to impact labor’s ability to protect our members. Click here to read rail labor’s joint letter to FRA Administrator Batory.

ADVOCATING FOR FEDERAL WORKER HAZARD PAY DURING COVID-19: NFFE-IAM Federal District 1 is fighting for hazard pay for members who risk exposure during the pandemic.  Legislative language in the House CARES 2 package includes expanding who qualifies for hazard pay, codifying pandemics as a qualifying risk, extending the hazard pay cap beyond 25%, and overlaying an automatic hourly increase on top of current wages.

The legislation would expand eligibility for many federal employees who report to a work station during the pandemic, and covers those with direct contact with the virus, such as VA nurses and doctors who are paid under a special pay statute and not entitled to hazard pay under current law.

FIGHTING TO SAVE WASHINGTON STATE ALCOA JOBS: The IAM is mobilizing to save roughly 600 IAM jobs at Alcoa Intalco Works in Ferndale, WA. The company recently announced plans to shut down its aluminum smelting operation, one of the few facilities of its kind remaining in the United States.

“Allowing this facility to close would do irreparable damage to our nation’s capacity to produce aluminum domestically, severely damage our domestic supply chain, and endanger our national security and sovereignty especially in times of national emergency or foreign conflict,” wrote Martinez and Allen.

The IAM also sent a letter to President Trump, urging the administration to institute the Defense Production Act to save the important plant.

IAM SUPPORTS FEDERALIZING MEDICAL SUPPLY CHAIN: The IAM is supporting legislation that would require the president to use authorities under the Defense Production Act to require emergency production of medical equipment to address the COVID-19.

“This legislation would resolve the rising competition among states for PPE,” Martinez wrote. “The pandemic has caused states to fiercely bid against each other for medical supplies.” 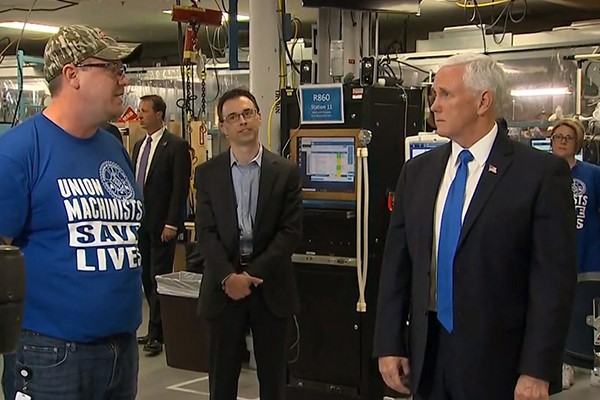 GE HEALTHCARE WORKERS GET NATIONAL RECOGNITION: IAM Local 1406 members in Madison, WI, who are ramping up production of ventilators to combat the COVID-19 crisis, were paid a visit by Vice President Mike Pence.

“The true heroes of this pandemic are people like our IAM Local 1406 members in Madison,” said IAM International President Robert Martinez Jr. “Day in and day out, they are doing the work that is saving lives and getting us closer to the end of this crisis. We owe each and every one of them, and all working people on the frontlines fighting this disease, a great debt of gratitude.”

“The support they’re providing doctors, nurses and health professionals during this time is extraordinary and unprecedented,” said IAM Midwest Territory General Vice President Steve Galloway. “While we hope the Vice President enjoyed his visit and seeing firsthand the world-class ventilators IAM members produce day-in and day-out, our members’ dedication and working-class sacrifices run far deeper than any photo opportunity and should be remembered after the dust of COVID-19 settles.”

IAM seeks federal help to save Intalco Works The Stand