September Sister of the Month

US September Sister of the Month
Connie Hoyt and Cat Treiber 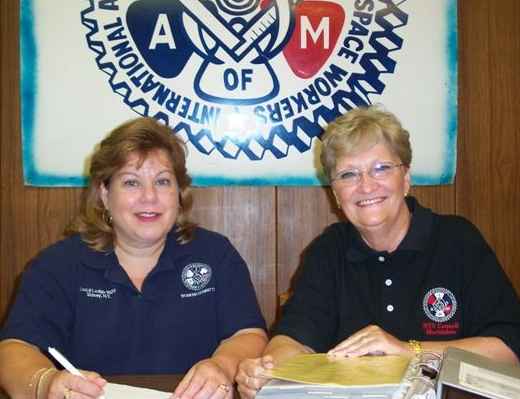 Concetta “Connie” Hoyt is a Stocker/Shipper at Amphenol Aerospace and has been an IAM member for 29 years.  Six years ago, she was encouraged to run for the position of Lodge Secretary at IAM LL 1529.  She won that election and has taken pride in holding the position ever since.

Sister Connie follows in the footsteps of her father, was Local Lodge President for 22 years, and her uncles, previous lodge officers and stewards.  The union way has always been a strong part of her life, so she naturally became more involved.  She attended lodge meetings and worked for the betterment of her sisters and brothers, because she truly cares about them.

Upon being elected to her position, Sister Connie sought the advice of past officers and presently active members and officers.  She as the only woman officer, she sometimes felt left out of the loop.  She sat down with the lodge president to voice her concerns and a positive dialogue developed, which remains to this day.

Sister Connie advises sisters to not be afraid to take that first step to become more involved.  Never give up!  She says it’s important to listen to your members.  Get involved and stay involved, but above all, “Keep it honest!”

Connie is active in other community and labor groups, but says her favorite interest is her grandson.

Carol a. Treiber (CAT) is member of IAM Local Lodge 1529 in District Lodge 15 and has just been elected Vice President of the New York State Council of Machinists, Area 6.

Sister Cat is a third generation union member who was taught from her childhood that you NEVER CROSS A PICKET LINE.  Following the example of both parents and her grandfather, she’s been an active union member, holding the position of Shop Steward, Women’s Committee Rec. Sec., District Delegate and active in the New York State Council of Machinists.  It was with the encouragement of fellow lodge members and the very supportive women’s committee that Sister Cat decided to seek the position of NYCM Vice President and won her election.

For others wanting to become more active and make a difference, Sister Cat recommends taking advantage of as many educational opportunities as you can.  Surround yourself with supportive peers, never take no for an answer and if at first you don’t succeed, stay positive and try again.

Sister Cat says her devoted husband and two daughters help keep her going in her many activities within the union and her community.  In her spare time she loves to take her three grandchildren camping in their RV.

Sister Kathryn McCarthy has been an IAM member of Local Lodge 11 for three years and has held the position of Trustee for almost the entire time.  An aircraft inspector at AVCORP Aerospace Industries, Sister Kathryn was encouraged by friends and colleagues to attend lodge meetings.  She soon began taking a more active part, because she wanted to participate in building her newly formed lodge.

Sister Kathryn says she’s received help and encouragement from all her union sisters and brothers.  One of her brothers encouraged her to attend the Basic Editor’s Training at the Winpisinger Center, which ultimately led to her creating The Delta Wing, LL 11’s newsletter.  She is especially proud that The Delta Wing won an honorable mention award at the 2004 Grand Lodge Convention in Cincinnati, Ohio.

Based on her own experience, Sister Kathryn advises any sister desiring to become more involve to educate themselves on how the union functions.  She admits to being very timid at meetings until she learned procedures, adding, “Education is the key to power and the more you learn, the more confident you feel.”