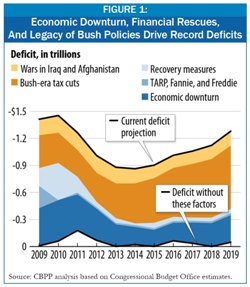 Critics who bash Congress and the Obama administration’s stimulus and jobs programs as the cause of the nation’s high deficits ignore the main sources of the wave of red ink: the Bush-era tax cuts, the wars in Iraq and Afghanistan and the economic downturn.

A new study by the Center on Budget and Policy Priorities shows that “Just two policies dating from the Bush Administration – tax cuts and the wars in Iraq and Afghanistan – accounted for over $500 billion of the deficit in 2009 and will account for almost $7 trillion in deficits in 2009 through 2019 … These impacts easily dwarf the stimulus and financial rescues.”

The Bush tax cuts, where most of the benefits went to the wealthiest Americans, the war in Iraq, which the Bush Administration predicted would be paid for with oil revenues from Iraq, and the war in Afghanistan were adding billions to government spending when the recession began in 2007. As the recession deepened into the Great Recession, the Congressional Budget Office issued a report in January 2009, two weeks before President Obama was sworn in, that the 2009 deficit would be “well over $1 trillion.”

The spending on economic stimulus and job creation programs are a small part of the deficit and decrease over time, while the Bush tax cuts, if extended, will widen the deficit in future years. The Obama Administration has proposed keeping the tax cuts for middle-class families intact while letting the tax cuts for wealthy Americans expire.