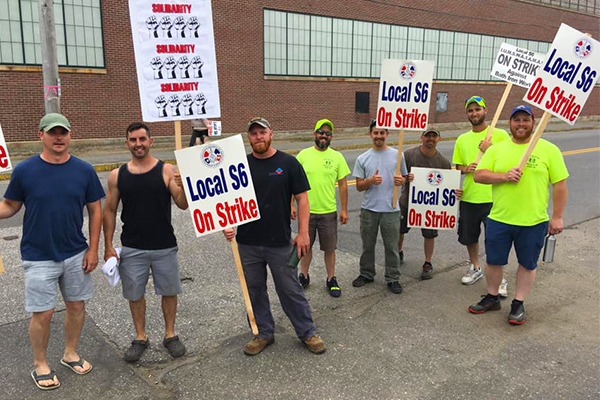 IAM Local S6’s strike at Bath Iron Works’ (BIW) shipbuilding facility in Maine continues to build support in the Machinists Union’s effort to get a fair labor contract that stops the company from expanding the outsourcing of good jobs and protects worker seniority.

“A job is about a lot more than a paycheck. It’s about dignity. I urge Bath Iron Works to come back to the table and make a fair offer to the hardworking men and women of IAM Local S6,” Biden said.

Maine AFL-CIO President Cynthia Phinney urged the shipbuilder’s management to “go back to the bargaining table and negotiate a fair contract.”

“BIW proposals roll back job quality, worker protections and safety,” said Phinney. “That’s why workers overwhelmingly rejected this contract. All over this state and country the essential people are rising up to demand respect, justice and a fair share of the wealth we create.”

Bath Iron Works, a subsidiary of General Dynamics, has refused to put aside its misguided proposals to subcontract work without addressing the root causes of workforce shortages at the shipyard, despite the IAM presenting numerous viable solutions to meet the needs of the company and the U.S. Navy.

The more than 4,300 IAM-represented workers walked off the job and started picketing after voting down the company’s “last, best and final offer” on Sunday, June 21.