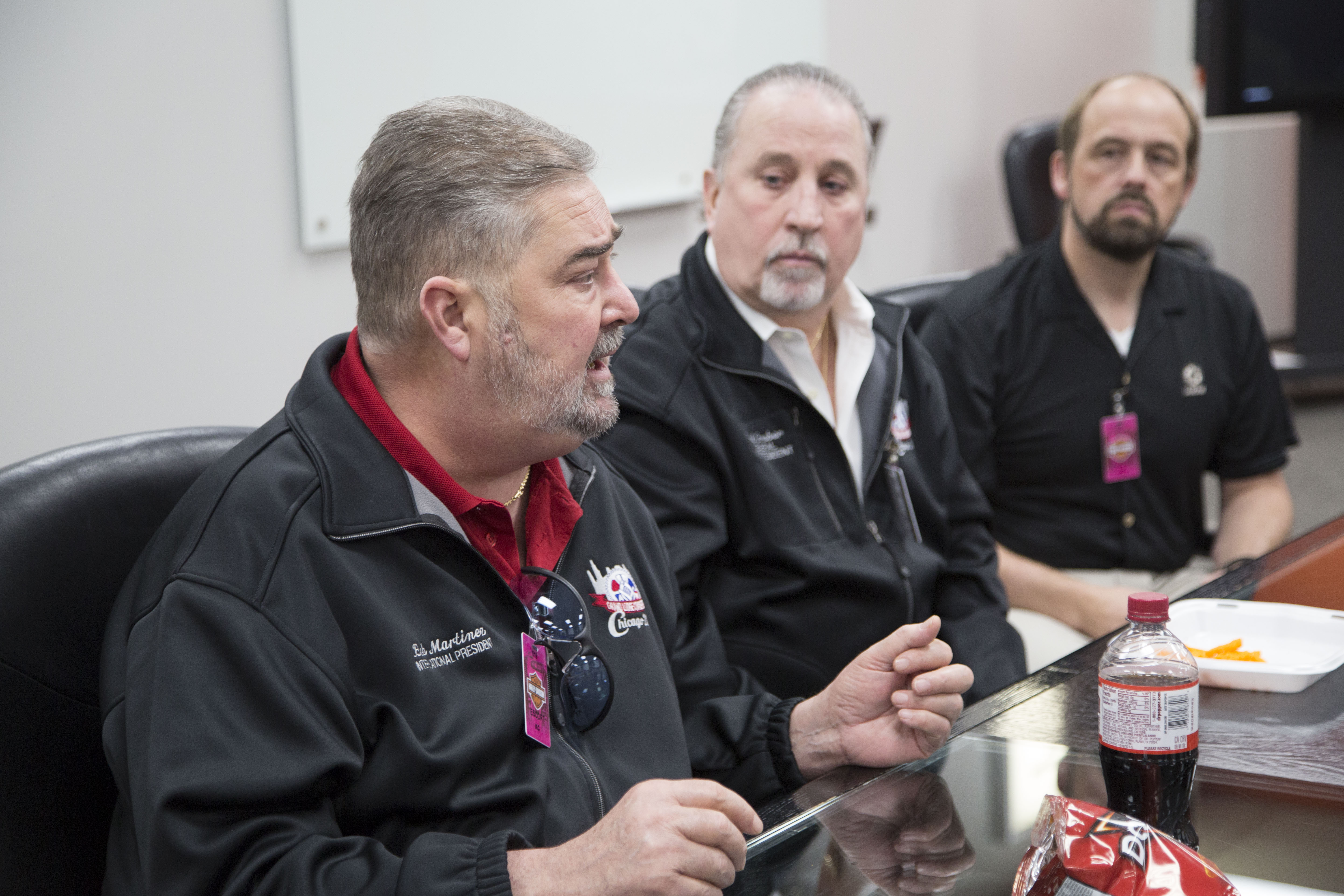 The IAM stands ready to deploy every union resource available in order to ensure members at the former American icon Harley-Davidson get a fair and just contract, said IAM International President Bob Martinez, along with IAM Midwest Territory General Vice President Philip J. Gruber, during a recent visit with IAM Local 176 members at the Harley-Davidson plant in Kansas City.

“The IAM is behind its membership one-thousand percent,” said Martinez. “We will do whatever it takes to ensure our members get a fair agreement.”

Click here to see photos from Martinez and Gruber’s visit

The visit comes as the IAM prepares to negotiate Harley-Davidson contracts, in coordination with the United Steelworkers (USW) union, in Kansas City and Milwaukee.

The Machinists also represent Harley-Davidson workers in York, PA. Martinez met with those members in February 2017.

He says this visit to Kansas City was especially important as IAM Local 176 members will be the first group at the bargaining table beginning in 2018.

“One of the main reasons I’m here is to make sure you know that you have the full support of your Union in this upcoming negotiation,” said Martinez. “This unit will be the first unit at the table. We have to draw a line. And whatever we do, it will be predicated on the Bargaining Committee and the membership’s approval. I personally commit to you everything we have in the Machinist arsenal, to make sure we change the collective bargaining agreement based on what the membership wants.”

At issue is the company’s hiring of temporary workers to replace and do the same job as full-time workers – for significantly less pay. The continuous outsourcing of American jobs to foreign soil and health care are also major concerns.

The IAM has already begun – as early as 2017 – putting in place a number of resources dedicated to upcoming negotiations with the motorcycle-maker, including negotiation preparation training for the Bargaining Committee, a comprehensive communications plan, dedicated staff members from the IAM Grand Lodge, and meetings with IAM Local and District leadership, economists and attorneys.

“We’re not going to get a good contract – we’re going to take a good contract,” said Gruber. “My commitment to you is whatever happened seven years ago, we’re moving forward. You have my full commitment with any resource you need, to put together a good and successful agreement with this company.”

The IAM visit follows a May 2017 announcement of the company’s plans to open a production facility in Thailand. Martinez characterized the announcement as a “slap in the face to U.S. workers who built an American icon.”

The visit also comes on the heels of a September 2017 IAM joint statement with USW, where Martinez along with USW International President Leo Gerard announced, on behalf of their respective memberships, the unions’ decision to withdraw from a two-decades old partnership agreement with the company.

“The restraints are off of us,” said Martinez. “Getting rid of the partnership agreement unleashes you from any other commitments you had before. We’re on new ground. The Committee is free to submit whatever proposals the membership believes is necessary to bring pride and integrity back to what was once a true ‘Made in America’ icon.”

Following the meeting, Martinez and Gruber toured the Kansas City facility where they received a first-hand look at how Harley-Davidson products are made in the U.S.

In addition to meeting with IAM members in the plant, Martinez and Gruber also met with members of the Harley-Davidson Joint Union Council, a panel made up of IAM and USW leadership from four locations, including Tomahawk, WI, represented by the USW. The Council was put together in 2013 in response to unfair contracts of the past and meets approximately four times a year to discuss union issues and share best practices.

“Solidarity – both within each bargaining unit and across the multiple locations – will be key this negotiation,” said IAM Collective Bargaining Director Craig Norman, who will be leading negotiations on behalf of the IAM. “That’s what this Council is about – to show solidarity when addressing items that are common to each Local at each facility.  Our cooperation and alignment are imperative to our membership. The fight starts at the ground level. No longer will the company be able to divide and pit one location against another. We’re in this together.”

Click here to see photos from Martinez and Gruber’s visit