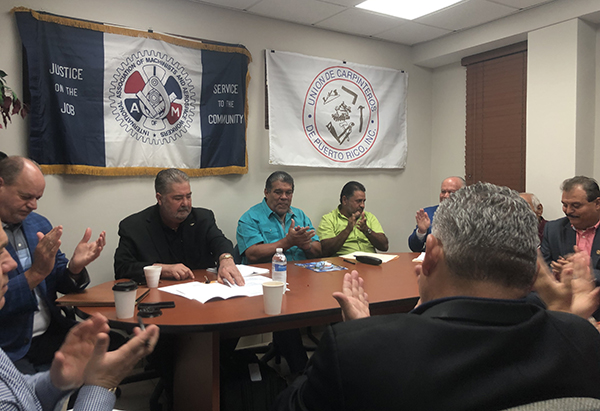 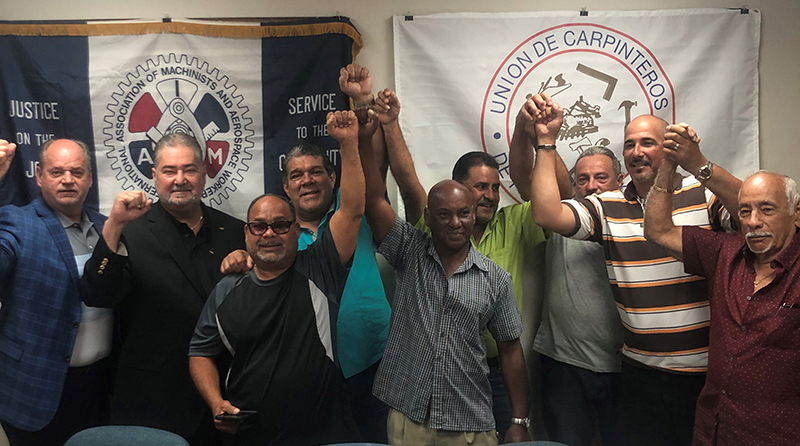 The IAM officially welcomed more than 500 new members at a charter signing that affiliates the previously independent Union Carpenters of Puerto Rico (UCPR) with the IAM. The signing comes after UCPR members had voted unanimously to join the IAM.

The partnership immediately expands the influence and resources available to the carpenters, who are now part of a 600,000-member union with a footprint spanning North America. They are joining a growing IAM presence in Puerto Rico, which already includes workers at PepsiCo/Frito Lay.

“I want each and every one of you to understand the IAM’s commitment to all of you and the great people of Puerto Rico,” IAM International President Robert Martinez Jr. told new members at the signing ceremony. “Together, we are going to stand with you to make sure your work is protected, you have safe work environments and you have the political influence to create even more work.”

The carpenters are a critical part of rebuilding the island, which is still recovering from the historic damage of Hurricane Maria. The IAM, led on the ground by IAM Business Representative and Puerto Rico Federation of Labor President José “Lole” Rodríguez-Báez, was instrumental in relief efforts to IAM members and working people on the island.

“It makes perfect sense that the Union Carpenters of Puerto Rico would want to join the IAM and become Fighting Machinists,” said IAM Southern Territory General Vice President Rickey Wallace. “Together, we will not only grow our footprint on an island that is home to some of the most resilient people I’ve met, but our solidarity will set the precedent for the working class here.  We are honored to welcome you into our union family and call you Brothers and Sisters. Special thanks goes to Business Representative Rodríguez-Báez for his hard work in making this partnership a reality. ”

The IAM most recently mobilized on the island at the 2018 Labor Council for Latin-American Advancement (LCLAA) Conference. Dozens of IAM members and leadership spent a day cleaning and painting a women’s shelter.

A strategic plan is being implemented that will aid the IAM’s new members in servicing, organizing, training and education, and finance.